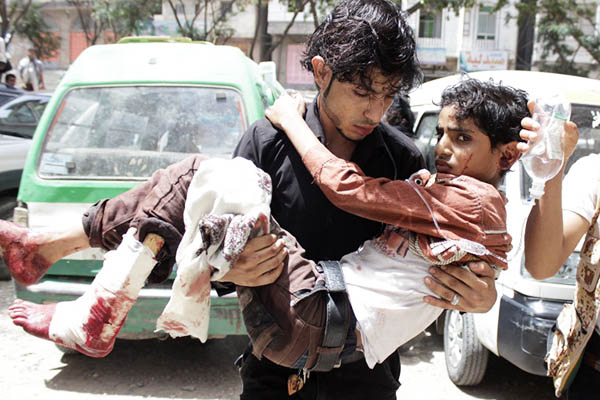 Fighting between loyalist and anti-government forces continues on ground in war-torn state.

Four air raids struck the Sanaa presidential complex and a nearby hill where rebel reinforcements were being prepared to send eastward to the oil-rich Marib province, according to a military official.

Marib has been the scene of days of deadly clashes between Shia Houthi rebels and fighters loyal to the exiled president, Abedrabbo Mansour Hadi. Sunni tribes and pro-Hadi troops battled Houthi rebels and their allies in Marib’s Sarwah district, through which Yemen’s main oil export pipeline passes, tribal sources said.

The 435-kilometer line links Marib’s Safir oilfields with the Ras Isa terminal on the Red Sea coast, and control of the province has been a key goal for anti-government forces. Tribal sources said 90 rebels were killed in clashes and airstrikes in Marib. Eight pro-Hadi fighters were also killed in fighting, they said.

AFP could not independently verify the death toll.

The Saudi-led air campaign meanwhile entered its second month on Sunday. Among the targets were rebel positions in the main southern city of Aden, where military sources said overnight clashes left seven people dead, including four rebels. In other fighting, local officials in Taez, southwest of Sanaa, said intense clashes had left casualties, among them civilians.

In the southern city of Daleh, coalition planes dropped medical aid to pro-Hadi fighters, after the rebels prevented a convoy of humanitarian organizations from carrying aid into the city, local officials said. And in nearby Abyan province, five rebels were killed when pro-Hadi militiamen fired rocket-propelled grenades at one of their vehicles, a local official said.