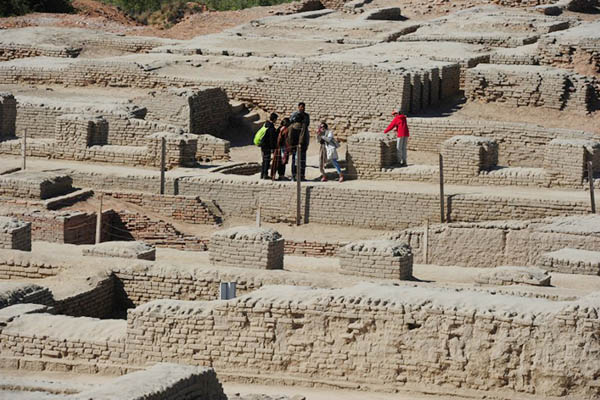 Behind the battle to preserve Pakistan’s lost city

The center of a powerful ancient civilization, Mohenjo Daro was one of the world’s earliest cities—a Bronze Age metropolis boasting flush toilets and a water and waste system to rival many in modern Pakistan.

Some 5,000 years on archaeologists believe the ruins could unlock the secrets of the Indus Valley people, who flourished around 3,000 B.C. in what is now India and Pakistan before mysteriously disappearing. But they warn, if nothing is done to protect the ruins—already neglected and worn by time—it will fade to dust and obscurity, never taking its rightful place in history.

“Everybody knows Egypt, nobody knows Mohenjo Daro, this has to be changed,” says Dr. Michael Jansen, a German researcher working at the sunbaked site on the banks of the Indus river in Pakistan’s Sindh province.

Jansen is at the forefront of a new effort to promote the site internationally while finding ways to protect what is left. In summer temperatures can soar above 46 degrees Celsius. “There is enormous thermo-stress,” says Jansen, adding that salt from the underground water table is also damaging the ruins.

But it’s more than just the weather and time. Pakistan’s bloody fight against militancy has also raised the specter of destruction by an Islamist group, much like Islamic State destroyed the ruins in Syria’s Palmyra. Most horrifying, however, is the wanton disregard for Mohenjo Daro—or “mound of the dead”—by ordinary citizens.

In 2014 police stood atop the main stupa as hundreds of people swarmed the site to, ironically, commemorate Pakistan’s cultural heritage—complete with scaffolding, dancing, fireworks, heavy spotlights and lasers.

Sardar Ali Shah, cultural minister in Sindh province, vowed never to let such a thing happen again. “It’s like you are jumping on the bed of a 5,000-year-old ailing patient,” he tells AFP.

Yet today curious visitors still roam the remains with impunity, many leaving rubbish in the once pristine-streets and wells.

Jansen and his Friends of Mohenjo Daro society aim to promote the site internationally, with plans to recruit Pakistanis around the world for conferences, seminars and debates. Dr. Kaleem Lashari, chief consultant to the Pakistani government over Mohenjo Daro, said they would also digitally archive the Indus script—which has never been deciphered—in hopes that making it accessible will increase the site’s profile.

At the site itself, he said, technical reviews are being held to examine the water logging issue and other ways to shore up the ruins, while exploring new, modern technology that allows researchers to ascertain what lies beneath the surface in the portions of the city not yet excavated.

But, Lashari says, perhaps the biggest challenge remains Pakistan’s international image, tarnished by extremism, corruption, poverty, and insecurity. “Foreigners are afraid to visit Pakistan and the site because of the chronic issue of law and order,” he warns.

The issues he cites underscore unsettling differences between modern day Pakistan and the civilization found among the ruins. At their peak during the Bronze Age, the Indus Valley people are believed to have numbered up to five million, with Mohenjo Daro their largest and most advanced settlement.

The layout of the city itself suggests an egalitarian people more concerned with cleanliness than hierarchy, says Dr. Jonathan Mark Kenoyer of the University of Wisconsin. “In Mesopotamia, the streets went from the city to the palace … whereas in [Indus] cities all the streets were organized to allow access to the whole city,” he says.

Mohenjo Daro had a complex water and waste management system, which observers have wryly noted was better than in many parts of Pakistan today.

Only a small portion of the site has been excavated properly, but the most important building appears not to have been a palace or a place of worship, but a massive public bath.

Houses had tiled bathrooms and their own cylindrical brick wells, sometimes raised to the second floor to allow for a flush system. None of this, however, has yet explained why such a powerful, advanced and flourishing civilization disappeared so abruptly around 1900 B.C.

Currently, there is no bid to excavate further among the plans being laid by Lashari and Jansen. “It is actually preserved when it is buried,” explains Harvard University’s Dr. Richard Meadow.

Despite their access to new technologies, that puts researchers in a quandary, especially as they try to understand what happened to the Indus people. As Jansen says, the “best way to learn information is to excavate.” But mysteries take time to solve: for now, the researchers say, they will settle for ensuring that Mohenjo Daro endures for a few centuries more.