Security Beefed Up in Parachinar 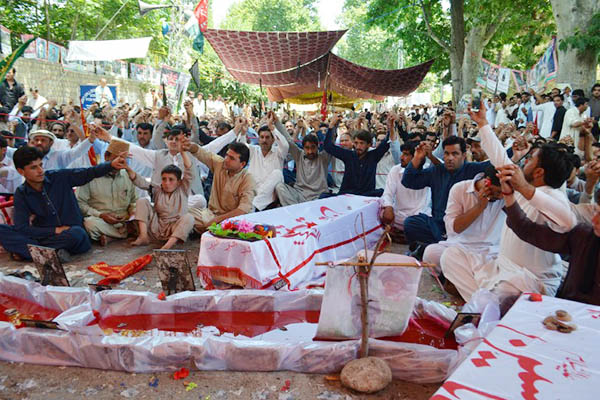 The Pakistan Army on Friday announced it was beefing up security in the tribal northwest after days of protests over twin blasts that killed 69 people in Parachinar, which has suffered most from militancy this year.

The announcement by the military came a day after protesters rejected an offer from Prime Minister Nawaz Sharif to financially compensate victims, saying the compensation was insufficient and they needed better security in addition to the funds.

Parachinar, the capital of mainly Shia Kurram tribal district, became a scene of carnage last week when the bombs ripped through a crowded market days ahead of the Eid celebrations marking the end of Ramzan. More than 200 people were wounded in the blasts.

Security fears coupled with a perceived slow response to the attack from Pakistani leaders have brought protesters into the town’s streets, as well as in other cities across Pakistan this week, and caused a furor on social media.

Some of the protesters’ demands were political, he said, but added the Army chief had ordered all those related to security be “solved.”

Politicians have been criticized for what was seen as a tepid response to the attack and towards Shias in the area, though some said they had been unable to visit due to security concerns. Several media outlets have also reported being kept away by security forces.

Kurram, one of Pakistan’s seven semi-autonomous tribal districts, is known for sectarian clashes between Sunnis and Shias, who make up roughly 20 percent of Pakistan’s population of 200 million.

Ghafoor added that Pakistan has begun building a fence along its border with Afghanistan to curtail the movement of militants across the porous frontier. The fencing will be done in two phases, he said: first the “highly sensitive areas,” and then the entire border.

Pakistan inherited its 2,400-kilometer border with its western neighbor when it gained independence from Britain in 1947, but Afghanistan has never formally recognized it. Both routinely accuse the other of harboring militant proxies to carry out cross-border attacks, while their militaries have engaged in numerous skirmishes in recent years.