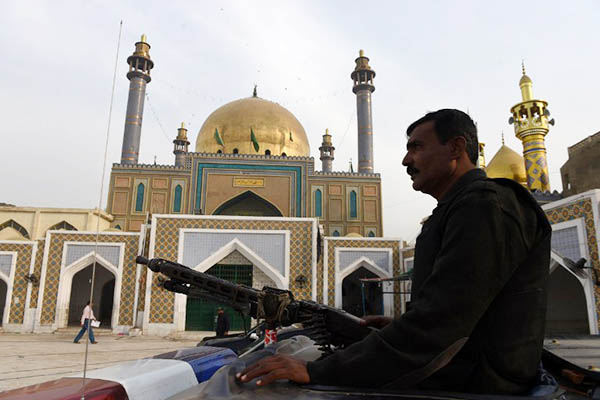 Military shuts down border with Afghanistan, with spokesman saying attacks had been carried out from sanctuaries in neighboring country.

Pakistan launched a nationwide security crackdown on Friday, officials said, after a bomb ripped through a crowded Sufi shrine killing at least 88 people including over 20 children and wounding hundreds.

Police had cordoned off the shrine of Lal Shahbaz Qalandar, a 13th century Muslim saint, early Friday as forensic investigators reached the town of Sehwan in Sindh province.

The centuries-old shrine’s white floor was still smeared with blood, with scattered debris including shoes, shawls, and baby bottles. At least 20 children are believed to be among the dead, the head of Sehwan’s medical facility Moeen Uddin Siddiqui said.

At 3.30 a.m. the shrine’s caretaker stood among the carnage and defiantly rang its bell, a daily ritual that he vowed to continue, telling AFP he will “not bow down to terrorists.”

The Islamic State group has claimed the attack, which came after a series of bloody extremist assaults this week, including a powerful Taliban suicide bomb in Lahore, which killed 15 people and wounded dozens. The attacks have dented growing optimism in security after Pakistan’s decade-long war on militancy.

Military spokesman Asif Ghafoor said the attacks had been carried out from sanctuaries in Afghanistan and that Kabul had been asked to take action. He also said the military had “closed” the porous border between the two countries, where Kabul and Islamabad have long accused each other of harboring extremists.

“Scores of suspects have been arrested from different cities” in a pre-dawn crackdown, a government official speaking anonymously told AFP.

Security officials said at least 18 terrorists had been killed in Sindh province overnight, and 13 more in the country’s northwest. The Sindh provincial government announced three days of mourning as Pakistanis vented their grief and fury on social media.

“Sunnis, Shias, Hindus, ppl from all faiths visit Sehwan often to pay homage to the great saint. This is an attack on our identity & culture,” said Twitter user Zahraa Saifullah.

Sufism, a mystic Islamic order that believes in living saints, worships through music and is viewed as heretical by some hardline groups. The Sunni jihadist I.S. group has targeted Sufi shrines in Pakistan previously, killing more than 50 at a shrine in Balochistan province last year.

Pakistan has seen a dramatic improvement in security recently, but the apparently coordinated series of attacks this week—most claimed by the umbrella Tehreek-e-Taliban Pakistan—has shaken the increasing confidence.

The push against extremism was stepped up after the country’s deadliest ever attack, a TTP assault on a school in Peshawar in 2014 that left more than 150 people dead—mostly children.

But critics have long argued the military and government crackdown does not address the root causes of extremism, and groups such as the Pakistani Taliban and increasingly Islamic State can still carry out spectacular attacks. There are “visible signs” the Pakistani Taliban, which is distinct from the Afghan Taliban, is regrouping, warned analyst Imtiaz Gul, with factions scattered by the military operation coming together again.

Islamabad has denied I.S. is in Pakistan despite several high-profile attacks and the group’s apparent affiliation with homegrown militants, such as the banned Sunni sectarian organization Lashkar-e-Jhangvi (LeJ). “I think they [I.S.] are capable of doing this,” Rana said, referring to the shrine bombing, as Gul warned the group would claim more such attacks.

The emergence of I.S. in Pakistan would be a major blow, and comes as key rival Al Qaeda has lost strength in what was once its “home ground.”