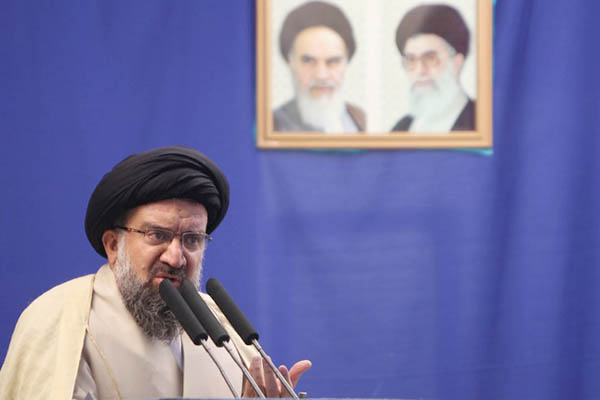 A senior Iranian cleric called during Friday prayers for Palestinians to “rage” against Israel after U.S. President Donald Trump declared Jerusalem as the capital of the Jewish state.

After the prayers Iranians took to the streets of Tehran and other cities to protest against Trump’s decision, calling for “death” to Israel and the United States and burning their flags.

Ayatollah Ahmad Khatami, an ultra-conservative and a key leader of the main weekly Muslim prayers, said Trump had drawn a line on years of peace efforts by recognizing Jerusalem as Israel’s capital. “He proved that the cure for the issue of Palestine is only, only, an intifada [uprising],” Khatami, who was appointed by Iranian supreme leader Ali Khamenei, said in his sermon at Mosalla, Tehran’s largest mosque. “Only intifadas can turn day into a dark night for the Zionist regime,” he said.

He urged the Palestinian people to rise and “rage against this occupying regime.”

“Any damage that you can incur to this occupying and criminal regime will mean you have taken a step toward pleasing God,” he said.

Trump’s declaration has triggered a global diplomatic backlash, with several world leaders warning the move could spark fresh unrest in an already volatile region. Iranian state broadcaster showed thousands of people protesting after the Friday prayers in Tehran and other cities. Protestors chanted “death to the America,” “death to Israel” and “death to England,” and torched American and Israeli flags.

They also held up signs that read “Al-Quds (Jerusalem) is ours” and “We stand against Israel to the end.”

There were other protests across the region and the Palestinian Islamist movement Hamas called for a “day of rage.”

Iran’s foreign ministry condemned Trump’s decision to recognize Jerusalem as the capital of its nemesis Israel, calling it “provocative and unwise.” President Hassan Rouhani said it was “wrong, illegitimate… and very dangerous.”

In his Friday sermon, Khatami warned that Iranian missiles could reach Israel and destroy its cities. “We build missiles and we will increase the range of our missiles as much as we can, to thousands of kilometers, in order to deprive White House dwellers of a good sleep,” he said. “If one day the Zionist regime wants to make a mistake, we will level Tel Aviv and Haifa to the ground,” he added.

Since the Islamic revolution of 1979, opposition to Israel and support for the Palestinian cause has been central to Iran’s foreign policy.