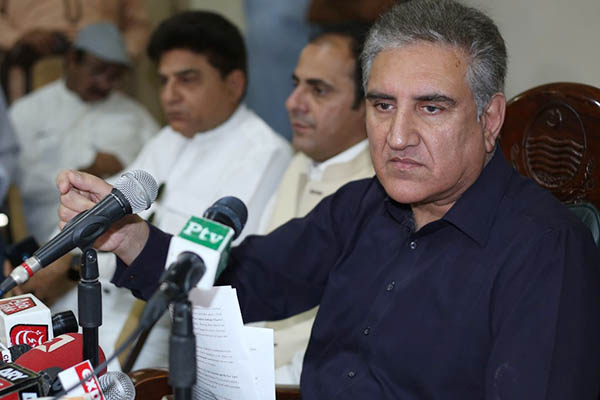 Pakistan’s Foreign Minister Shah Mehmood Qureshi on Sunday claimed his government had reliable intelligence that India was planning to carry out aggression against Pakistan later this month. India responded by accusing Qureshi of inciting “war hysteria.”

Relations between the neighbors nosedived after a suicide bombing in India-Occupied Kashmir in February killed 40 Indian security personnel and was later claimed by a Pakistan-based militant group though perpetrated by a local separatist. Pakistan has denied any role in the attack and Prime Minister Imran Khan offered cooperation in the investigation if credible evidence was provided by India.

Talking to reporters in Multan, Qureshi said the ambassadors of the permanent members of the U.N. Security Council in Islamabad had been informed about “the plan” two days ago. “We have reliable intelligence that India has made a new scheme and the planning is underway and there are chances of another aggression against Pakistan and according to our information this action can take place between April 16 and 20,” he said.

“I am saying it with responsibility and I have a responsible position. I know each word I say would make headlines in the international press,” he said, stressing the reliability of his claim. He said the planned aggression was aimed at “increasing diplomatic pressure against Pakistan.”

But India’s foreign ministry spokesman Raveesh Kumar, in a statement posted on his Twitter account, dismissed as “irresponsible and preposterous” the comments by Qureshi. The minister had “a clear objective of whipping up war hysteria in the region. This public gimmick appears to be a call to Pakistan-based terrorists to undertake a terror attack in India,” the statement said.

Days after the Kashmir bombing, New Delhi—which has long accused Islamabad of harboring militants who launch attacks on its soil—demanded Pakistan take “credible and visible action.” Soon after, it launched a cross-border air raid on Pakistan that kicked off a quick succession of attacks and dogfights between the arch-rivals over the disputed Kashmir frontier that spurred fears of wider war erupting.

In his statement, Kumar reiterated New Delhi’s earlier call, saying Pakistan must take “irreversible steps” against militants, “rather than making hysterical statements to obfuscate the core issue that bedevils our region: cross-border terrorism.”

Pakistani and Indian soldiers have continued to fire over the Line of Control—the de-facto border dividing Kashmir, killing several civilians on both sides. Kashmir has been divided between India and Pakistan since the end of British colonial rule in 1947. Both claim the Himalayan territory in full and have fought two wars over it.