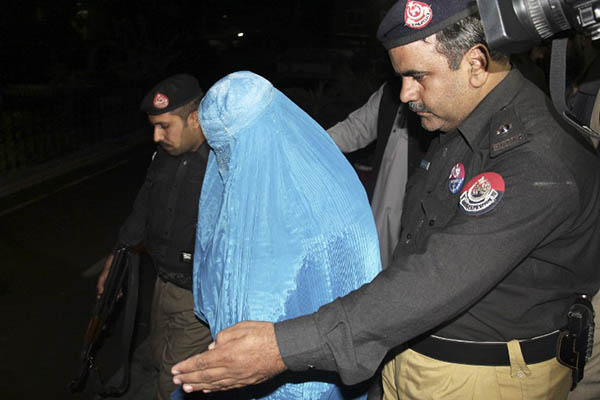 Accompanied by her four children, ‘Afghan girl’ crossed Pakistan-Afghanistan border at around 2:30 a.m.

An Afghan woman immortalized on a National Geographic cover was deported by Pakistani officials early Wednesday to her war-torn homeland following a brief period of detention for using fraudulent identity papers.

Sharbat Gula, whose blazing green eyes were captured in an image taken in a Pakistan refugee camp in the 1980s that became the magazine’s most famous cover, was discharged from hospital where she was being treated for Hepatitis C and taken to the border overnight, officials said.

“We have deported Sharbat Gula to Afghanistan. She crossed the border to Afghanistan at around 2:30 a.m. She was also accompanied by her four children,” said Asmatullah Wazir, an administration official in the border town of Torkham.

A second official, requesting anonymity, confirmed the move and said Gula, 45, was accompanied by officials from the Afghan embassy.

Speaking to AFP last week, Gula said she was “heartbroken” at the prospect of returning. “Afghanistan is only my birthplace, but Pakistan was my homeland and I always considered it as my own country,” she said. “I had decided to live and die in Pakistan but they did the worst thing with me. It’s not my fault that I born there [in Afghanistan]. I am dejected. I have no other option but to leave.”

Gula said she first arrived in Pakistan an orphan, some four or five years after the Soviet invasion of 1979, one of millions of Afghans who have sought refuge over the border since.

Since July hundreds of thousands have returned to Afghanistan in a desperate exodus amid fears of a crackdown, ahead of a March 2017 deadline for the final return of all Afghan refugees. Last month UNHCR said more than 350,000 Afghan refugees—documented and undocumented—had returned from Pakistan so far in 2016, adding it expects a further 450,000 to do so by the year’s end.