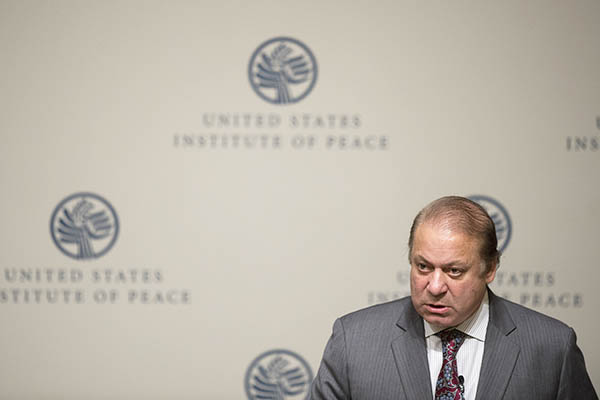 Sharif, who will meet President Barack Obama on Wednesday, called for warmer ties with the United States and offered Pakistan’s assistance in Afghanistan as U.S. forces prepare to withdraw next year.

But Sharif said that the unmanned strikes—which penetrate extremist havens deep in Pakistan’s most lawless areas—represented a “major irritant” in relations. “I would therefore stress the need for an end to drone attacks,” Sharif said at the U.S. Institute of Peace.

Sharif said Pakistan’s political parties believed that drone strikes violated the country’s territorial integrity as well as its own efforts to fight extremism.

In a new report, Amnesty International documented cases in which it said civilians were clearly killed, including an October 2012 strike that ripped apart a 68-year-old grandmother as she picked vegetables.

The human rights group said that Pakistani authorities, despite their public fuming at drone strikes, might quietly cooperate. “We are concerned that the Pakistani authorities, or aspects of the institutions, may also be assisting the U.S. to carry out drone attacks that may constitute human rights violations,” researcher Mustafa Qadri told a news conference in Washington.

Faced with concerns, the Obama administration has reduced but not ended drone strikes, which U.S. officials argue are the only way to reach Al Qaeda-linked militants.

White House spokesman Jay Carney said that the United States exercised “extraordinary care” and was “choosing the course of action least likely to result in the loss of life.”

“To the extent these reports claim that the U.S. has acted contrary to international law, we would strongly disagree,” he said.

Sharif spoke only briefly about drones in his main public address in Washington and vowed cooperation on Afghanistan—seen as the main topic that Obama will want to address on Wednesday.

U.S. officials want access for removal of equipment next year but also believe that Pakistan—the prime backer of the Taliban regime before the September 11, 2001 attacks—can play a key role in peace talks in Afghanistan.

The Pakistani leader said that his country supported a “peaceful, stable and unified” Afghanistan.

Sharif said he has assured Afghan President Hamid Karzai “that we wish neither to interfere in Afghanistan’s internal affairs, nor do we have any favorites.”

Sharif also told the U.S. audience that Pakistan wanted to resolve all problems peacefully with India. “I wish to assure this august audience that Pakistan desires to live in peace with its neighbor. We would not be found wanting in walking the extra mile,” he said. “Kashmir, of course, is a very difficult issue and very difficult to resolve but I think, by sitting and talking, we will be able to find some way of resolving that, too,” he said. “Because that is a flashpoint not only in the region, but the whole world,” he said of Kashmir.

Sharif regretted periodic setbacks to reconciliation. He met last month with Indian Prime Minister Manmohan Singh, who demanded an end to an uptick of violence on the disputed Kashmir border as well as action against Pakistan-based extremists linked to the grisly 2008 siege of Mumbai.

Sharif, who swept back to power in May, said that he wanted to start from the basis set in 1999 when he welcomed India’s then prime minister Atal Bihari Vajpayee to Pakistan. The effort collapsed within months as Pakistan-backed forces infiltrated Indian-administered Kashmir. Sharif blamed military chief Pervez Musharraf, who later ousted him as prime minister in a coup.

“Had our countries not wasted their precious resources in a never-ending arms race, we would not only have avoided the futile conflicts, but also emerged as stable and prosperous nations,” Sharif said.