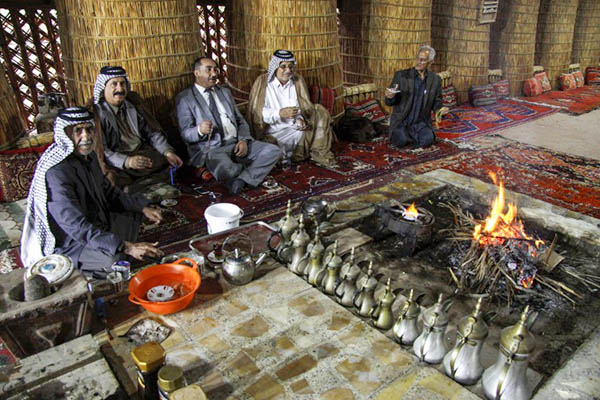 A bloody, age-old custom used by Iraq’s powerful tribes to mete out justice has come under fire, with authorities classifying it as a “terrorist act” punishable by death.

For centuries, Iraqi clans have used their own system to resolve disputes, with tribal dignitaries bringing together opposing sides to mediate in de facto “hearings.” If one side failed to attend such a meeting, the rival clan would fire on the absentee’s home or that of fellow tribesmen, a practice known as the “degga ashairiya” or “tribal warning.”

But in an age when Iraq’s vast rural areas and built-up cities alike are flooded with weapons outside state control, the “degga” may be deadlier than ever.

A recent dispute between two young men in a teashop in the capital’s eastern district of Sadr City escalated to near-fatal proportions, leaving a 40-year-old policeman with a broken hip and severely damaged abdomen. His cousin Abu Tayba said the policeman was “wounded in a stray bullet during a ‘degga’ on a nearby home.”

“Weeks after the incident, he’s still in the hospital, hovering between life and death,” said Tayba.

A few days later, it announced it would take legal action against three people accused of targeting a home in Al-Adhamiyah, north of Baghdad, with the deadly custom.

In Iraq, a country of 39 million people, clan origin and family name can carry weight in securing a job, finding romance, and gathering political support. They can also interfere in the work of the state, as tribal structures in some areas can be more powerful than government institutions.

Last year, Iraq’s tribes and the ministries of interior and justice pledged to work closer together to impose the law, but “deggas” seem to have hindered such cooperation.

Raed al-Fraiji, the head of a tribal council in the southern province of Basra, said the warnings have become commonplace. “This happens every day. Yesterday it happened twice. The day before, three times,” he said. “Two months ago, a domestic dispute between a husband and wife turned into an armed attack on the husband’s home. The exchange of fire killed one person and wounded three.”

Fraiji said tribal influence and practices were growing because the state was seen as unreliable. “For an Iraqi citizen, the law has become weak. Meanwhile, tribes impose themselves by force. Iraq is like a jungle—so a citizen will turn to a tribe to find solutions to their problems.”

The country has been ravaged by years of conflict since the U.S.-led invasion in 2003 that removed strongman Saddam Hussein and led to the rise of militias.

A decade later, the Islamic State jihadist group overran much of Iraq and was only ousted from its urban strongholds across the country late last year. Years of instability have left many of Iraq’s communities flush with weapons and largely out of the state’s reach, contributing to a preference for tribal mediation methods.

“The government is responsible for the increase in tribal conflict and of ‘degga’ cases,” said Adnan al-Khazaali, a tribal leader in Baghdad’s Sadr City. “Most of the young men today are armed and even the security forces cannot stand in their way.”

Tribal leaders and government officials alike are clinging to the hope that the new ruling could change things. “These incidents are continually happening, and are often causing casualties,” said interior ministry spokesman Saad Maan. “Court rulings and their implementation,” Maan said, could be the only way to secure peace.

Back in Basra, the head of the local human rights commission estimated around a dozen people were wounded or killed in “deggas” last year. “These incidents threaten social peace,” said Mahdi al-Tamimi. “It’s sad and worrying, and cannot be eliminated without a solid and effective law.”

But Fraiji, known in Basra for his relatively progressive views, feared the court’s ruling would not be enough to take on Iraq’s powerful clans. “The decision will only remain ink on paper if the security forces do not enforce it on the tribes,” he said.