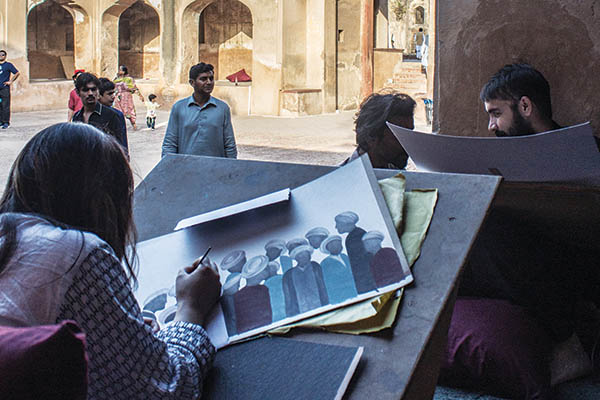 Miniature students at the Maktab installation at the Lahore Fort. Usman Saqib Zuberi

A widely publicized memo recently reminded us that Pakistan hosted its first biennale at Lahore’s Alhamra Art Council in 1987 under the rule of Gen. Zia-ul-Haq. Astonishingly, the military ruler himself inaugurated the event with a welcome address. Less astonishing is the fact that many talented Pakistani artists have been featured in biennales all over the world since the country’s inception. Perhaps in a bid to make up for lost time, the past six months have witnessed two biennales in Pakistan—the first in Karachi from Oct. 22-Nov. 5, 2017, and the second in Lahore from March 18-31.

The path to the Lahore Biennale wasn’t easy; tension over the project had been building for four years. Initially directed by artist Rashid Rana, who undertook the mission of spreading the gospel with fervor and passion across the western hemisphere of high and low art, it hit an unfortunate financial crunch and Rana dropped out. Meanwhile, the habitual rivalry between Lahore and Karachi was festering as news of the Sindh capital’s own plans for a biennale started making the rounds. Two biennales in the same country in less than 12 months? Impossible, said critics.

Coming ahead of the Lahore event, the Karachi biennale was a quietly successful affair. This, however, increased pressure on Lahore and its re-assembled team under Qudsia Rahim worked flat out and, against all odds, managed to present a stunning show. The reasons for this quantum leap lie within the inventive collaboration between artists and institutions, particularly the Punjab Government, which facilitated contemporary art installations within heritage sites of the Mughal and Colonial eras, adding a gravitas that only Lahore could provide.

In light of this merging of the ancient and the modern, it is ironic to review previous projects of monument recycling. With colonization, the British Raj chose to reuse the grandest civic buildings of the Mughal era. Since the massive tombs of Mughal royals were seen as duly prestigious, the new rulers swiftly utilized them. The present-day Governor’s House stands near the tomb of Muhammad Qasim Khan, and was occupied as living quarters by the British Lt. Governor General in 1870. The Tomb of Anarkali was repurposed into the Anglican St. James Church in 1851. The Dai Anga Mosque, meanwhile, became the office of the Railways manager, while yet another Mughal tomb was converted into a wine shop operated by a Sikh proprietor.

According to post-colonial research conducted by William J. Glover, the Walled City managed to resist Raj reclamation by virtue of three characteristics: its notorious ‘filth,’ described in one colonial report as “the particular Lahore smell” of human excrement; its opacity to census-taking; and its sheer inscrutability. This form of frantic urbanization has persevered throughout Lahore’s palimpsest of governance—until the current chaos unleashed by the construction of the Orange Line Metro. As a cultural historian familiar with Lahore, I find that the theme of urbanization and displacement dominates both the city’s skyline and conversation. The following review of the biennale, therefore, follows the traces of the Orange Line and its impact on the capital of Punjab province.

Artists who related site to content in significant ways made the best use of the glorious historical sites made available to them in this year’s biennale. The most impressive was Maktab, which transformed the courtyard of the Summer Palace into a karkhana (atelier) with 24 students from the miniatures department of the city’s National College of Arts working under the oversight of Imran Qureshi. Each student squatted inside one of the ornate niches, painting in a daily performance that invited exchange and debate with the viewing public. Their fusion of traditional technique with contemporary content is a deliberately paradoxical act of homage and impiety to urge rethinking tradition in terms of socio-cultural changes. The reclamation of the Mughal context is a reference to its original eclecticism and religious tolerance, values threatened today by the instrumental politics of the ‘Arabist shift.’ 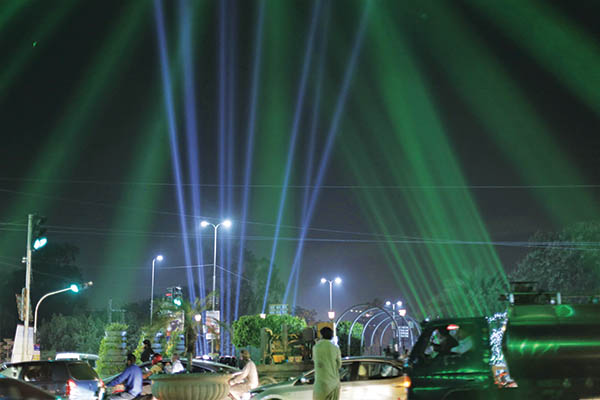 An identical argument was behind the installation of the Awami Art Collective’s light project: Roshni. At a crucial intersection of one of the city’s main thoroughfares was planted a white crescent in front of a LED portrait of Quaid-e-Azam Muhammad Ali Jinnah, Pakistan’s founder. From this portrait were projected vast, interacting laser beams of white and green, the colors of the national flag, with green symbolizing the Muslim majority and white the country’s minorities. This was a simple statement indicating that although his portrait is a habitual emblem of nationalism, in his teaching, Jinnah defended the rights of minorities: a vision now conveniently and tragically disregarded. Sadly, this project was only available for one week, after which it had to be removed by the organizers due to lack of funding.

Another impressive site-specific installation was that of Aisha Khalid at the Shahi Hammam, only recently restored with aid from the Agha Khan Foundation. The bath was covered with a mirror that reflected the fabulous tiled dome as it plunged downwards, fusing heaven and hell in glorious embrace. This harmony was interrupted by bright orange lines, which struck across the surface as if indicating where it should be cut. This was a stark reference to the threat posed by the Orange Line Metro to traditional heritage and housing in the Walled City. In her cameos of tile fragments: More Beautiful for Having Been Broken (2018), Khalid extends this orange line as a seam to show the split between the wounded ornamentation and her healing geometric patterns. 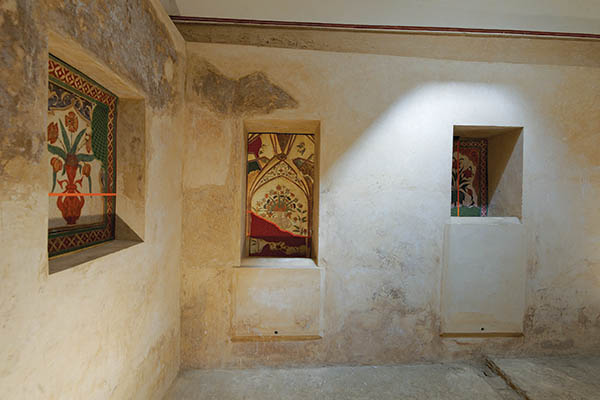 Aisha Khalid’s More Beautiful for Having Been Broken installation at the Shahi Hammam. Hammad Gillani

Further examining how urbanization affects environmental devastation and human displacement was the video installation La Hore Sher (2018) by Mahbub Shah. Its three-hour/three-screen loop scans desolate horizons with deadpan relentlessness, a sad lament from a female voice adding to the gloom. Featured in the exhibition Invitation to Action, curated with care by Mariah Lookman in the fine old Mubarak Haveli, it was joined by 11 other fascinating works. Among them was Sri Lankan T. Shanaathanan’s Incomplete Thombu (2011), made up of earthy pastel drawings, rough maps, notes and architectural plans to illustrate the displacement of Tamils during the civil war in Sri Lanka—a conflict that remains fresh in the minds of the people who suffered through it for nearly three decades.

Textual and photographic documentation of the city of Karachi and its migratory history comprised a social panorama by Naila Mahmood, who selects inner city kitchens to perform as mini metaphors for the macro-urban pressure. Opposite her work at the Alhamra were three paintings on fabric by Shezad Dawood. Apart from Qureshi’s golden paintings in the Hammam, these were the only paintings at the Biennale, yet their neo-pop exploration of U.S.-Pakistan relations on both cultural and political levels touches a timely note of satire that appeared to be missing from the remainder of the event. 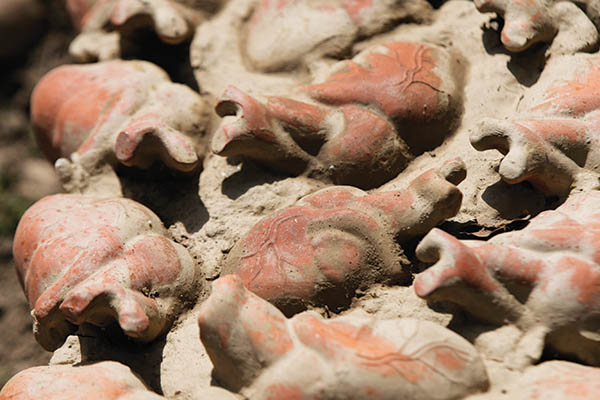 Gentle irony appeared in a very different work by Ali Kazim: Lover’s Temple Ruins (2018). Sited in the Bagh-e-Jinnah, it recreated an archaeological dig where ceramic heart sculptures had been unearthed. As a popular public park, the bagh remains a site of rare refuge from the urban chaos as well as for romantic rendezvous… two precious aspects of everyday life that cannot be ignored.

These are just some of the many works of art that were featured at what is hopefully the first of many Lahore biennales to come. Together with an inspiring discussion on The Power of Art and Activism in the 1980s between the great matriarchs of Pakistani art and art history Salima Hashmi and Naazish Ata-Ullah, they offered a hint of resistance to the proceedings, serving as evidence for the defense of subverting the global by concentrating on the local.

Whiles is an art historian, critic and curator. She has authored Art and Polemic in Pakistan: Cultural Politics and Tradition in Contemporary Miniature Painting