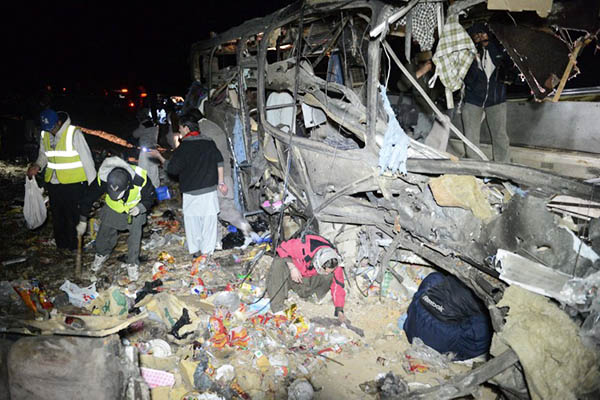 Lashkar-e-Jhangvi claims bombing that killed 24 Shia pilgrims and wounded another 31.

At least 24 Shia pilgrims returning from Iran were killed and 31 others wounded when a bomb hit a bus in Balochistan province on Tuesday, officials said.

The attack took place at Dringhar village on the Pakistan-Iran highway some 60 kilometers west of Quetta, Balochistan’s capital. “At least 24 people were killed and 31 others were wounded,” said provincial home secretary Asad Gilani.

Gilani said it was not immediately clear what type of bomb was used or whether it was a suicide attack. He said that two buses had been traveling together with security vehicles provided by the government, and that the bomb struck one of the buses.

Local government official Shafqat Shahwani said 51 passengers had been on board at the time of the blast. He said that bomb disposal officials suspect the bomb was planted on the roadside and detonated remotely, but he did not rule out the possibility of a suicide attack. He added that the driver of the bus told authorities that he did not see any car hitting his vehicle, but felt a sudden blast followed by the cries of women and children amid the destruction. “We have declared an emergency at hospital and doctors and paramedics are trying to save the wounded,” Shahwani added.

Two people were killed in a similar attack on Jan. 1 when a bomb targeted a bus carrying Shia pilgrims near Quetta.

A purported spokesman of Sunni militant outfit Lashkar-e-Jhangvi claimed the responsibility for Tuesday’s attack. Lashkar-e-Jhangvi is regarded as the most extreme Sunni terror group in Pakistan, and is accused of killing hundreds of Shias since its emergence in the 1990s. It developed close ties to Al Qaeda and the Taliban, which ruled in Afghanistan from 1996 until the 2001 U.S.-led invasion. Pakistan formally banned the group in 2001, and there have been numerous crackdowns with arrests and killings of known Jhangvi operatives over the last 20 years.

There has been a rise in sectarian violence in Pakistan after several deadly clashes between Sunni and Shia Muslim groups near Islamabad in November last year. Shia Muslims make up around 20 percent of Pakistan’s population, which is largely Sunni Muslim.