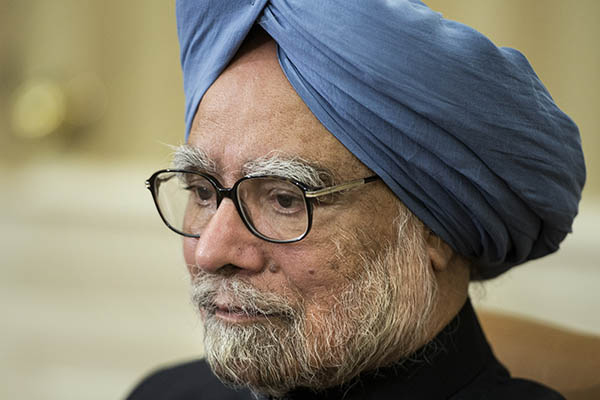 Indian Prime Minister Manmohan Singh on Friday toned down expectations for his planned meeting with Prime Minister Nawaz Sharif this weekend at the U.N., saying Pakistan remained an “epicenter of terrorism.”

Singh, making what will likely be a farewell visit to the White House after a decade in power, told President Barack Obama that India still faced “difficulties” because of the activities of its neighbor and bitter rival.

Singh and Sharif are expected to meet on the sidelines of the U.N. General Assembly in New York despite the tensions. A diplomat said the talks were expected Sunday morning.

“I look forward to the meeting with (Prime Minister) Nawaz Sharif even though the expectations have to be toned down given the terror arm which is still active in our subcontinent,” Sharif told reporters in the Oval Office.

Singh told Obama that India was facing difficulties because the “epicenter of terrorist activity remains focused in Pakistan.”

India has blamed militant groups like Lashkar-e-Taiba (LeT) and even elements of the Pakistani state for attacks on its soil, including the assault in a luxury hotel on Mumbai nearly five years ago which killed 166 people.

Deadly skirmishes across the de facto border in divided Kashmir meanwhile have jeopardized the meeting in New York, which would come months after peace talks again stalled between the two neighbors.

Since winning an election in May, Sharif has been vocal in his desire for better relations with India, but the recent flare-ups have overshadowed the prospects. Earlier, Sharif warmed up for the expected talks by saying that a nuclear arms race between India and Pakistan was a huge waste of money.

“Our two countries have wasted massive resources in an arms race,” Sharif said in his speech to the General Assembly. “We could have used those resources for the economic well-being of our people,” he added.

Singh’s visit to the White House had a valedictory tone, as he is not expected to lead his Congress Party into elections next year, with his political fortunes battered by a slowing economy and corruption claims after two five-year terms.

Obama praised Singh as a “great friend and partner to the United States and to me personally during his tenure as prime minister of India.”

Obama said that just in the past few days, India and the United States had concluded a first commercial agreement that would breathe new life into a slowed civilian nuclear pact between the two countries.

Indian authorities and U.S. firms had been haggling over liability payments that would have to be shelled out in the event of a nuclear disaster at any new generation power plants.

Obama also noted that the recent victory of an Indian-American woman in the Miss America beauty pageant was a sign of how close the countries had become connected in human, economic and cultural terms.

Singh also pointedly thanked Obama for “his vision, for his courage in giving diplomacy yet another chance” as he responds to a chemical weapons attack in Syria and Iran’s nuclear program. He stressed a warming of relations with Washington as a highlight of his premiership.

Obama has seen improving ties with New Delhi as a centerpiece of his strategy to shift U.S. economic and diplomatic resources to Asia, and views India’s vibrant democracy as a kindred national spirit to the United States in a region where political freedoms can be fleeting.

“All of us recognize that as the world’s two largest democracies, countries that have for a very long time been invested in, you know, the peace and prosperity of their own people, that there is a natural convergence between the United States and India,” Obama said.

Obama hosted Singh for the first state dinner of his presidency in 2009 and paid his own state visit to India a year later. Vice President Joe Biden was in India in June and a long string of U.S. cabinet-level officials have trekked to the country.

Obama and Singh met at a high point of U.S.-India defense cooperation. New Delhi has bought nearly $9 billion in U.S. defense articles since 2008, officials say and both sides want to do more business.

Neither leader however publicly mentioned India’s alarm at visa reforms in a proposed U.S. immigration bill in Congress that it says could disproportionately punish its thriving information technology and software sectors.