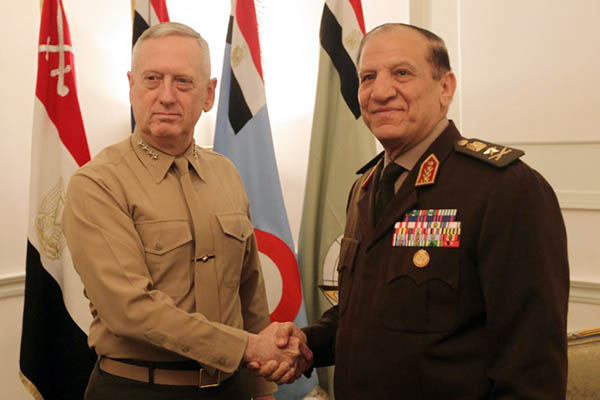 Egypt’s military on Tuesday accused a former armed forces chief of staff who plans to challenge President Abdel Fattah al-Sisi in March elections of forgery and other crimes linked to his candidacy announcement.

The general command of the Egyptian armed forces made the allegations against General Sami Anan in a video posted on the armed forces spokesman’s Facebook page.

Anan’s campaign team said he had been arrested but there was no official confirmation.

The video accused Anan of announcing his intention to run in the election “without getting the approval of the armed forces or following the required procedures to end his service in the military.” It also said Anan’s announcement on Saturday “constitutes direct incitement against the armed forces with the intent of causing a rift between it and the great Egyptian people.”

Anan was accused of forging official documents to erroneously suggest that his service in the armed forces had ended.

Anan’s announcement came just hours after Sisi confirmed he would seek a second term in the March 26-28 election, the third since the 2011 overthrow of strongman Hosni Mubarak. Several prominent figures who had been seen as potential challengers to Sisi had already ruled themselves out even before registrations opened on Saturday.

One of Anan’s top campaign aides, Hisham Geneina, told AFP that the presidential hopeful was arrested on Tuesday morning, but there was no confirmation from Egyptian officials.

Geneina, the former head of the Central Auditing Authority (CAA), was sacked by Sisi in 2016 after he was accused of exaggerating the cost of corruption. “He was arrested this morning at his office in [the Cairo district of] Zamalek and was taken to the military prosecutors,” said Geneina.

The arrest came before the armed forces’ statement, he said.

Ali Taha, a lawyer, said he was asked by the campaign to defend Anan and was on his way to the military prosecutors.

In his speech, Anan said he had already put in place a team of civilians to support his bid, including Geneina. Anan served as armed forces chief of staff from 2005 until he was retired by Morsi in 2012.

When the longtime strongman was forced to step down by the Arab Spring protests of 2011, he ceded power to the Supreme Council of Armed Forces (SCAF), an interim executive made up of 20 generals in which Anan served as number two.

Would-be candidates for the presidency must register with the National Elections Authority by Jan. 29. Former prime minister Ahmed Shafiq said on Jan. 7 that he would not stand, reversing a pledge he made from the United Arab Emirates in November.

Shafiq had disappeared for 24 hours after being deported to Egypt last month following years in exile in the U.A.E. Last week, Mohamed Anwar Sadat, a dissident and nephew of the late president of the same name, said he would not stand because the climate was not right for free elections.