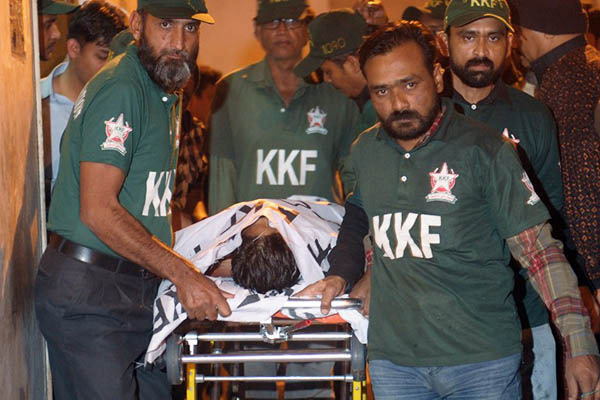 Gunmen shot dead a senior Sunni religious leader and two of his associates in Karachi on Friday, police said, while a separate attack killed three people who worked for a private television channel.

A spokesman for Karachi police said attackers sprayed bullets at the car of Usman Yar Khan, the provincial deputy chief of Jamiat Ulema-e-Islam, a religious party headed by Sami-ul-Haq, known in the West as the “father of the Taliban.”

“The gunmen fled away after the shooting and the injured were shifted to Jinnah Postgraduate Medical Center where Usman Khan and two of his associates died while a third is in critical condition,” he said.

In another attack in the port city, gunmen killed three people who worked for a private television channel. “Three people were killed when gunmen attacked a DSNG (digital satellite news gathering) vehicle of the privately run Express News in the western district of the city,” said police chief for the western district Javaid Odho. “The dead included a technician, the driver and a guard,” he added.

It followed an attack on Express News in December.

Media rights watchdog Reporters Without Borders (RSF) said last month that Pakistan was among the world’s five deadliest countries for the media in its annual round up of press freedom violations. Rangers are currently taking part in a joint operation with police in Karachi aimed at cleansing the city of terrorists and other hardcore criminals including hired killers, gun-runners and drug peddlers.