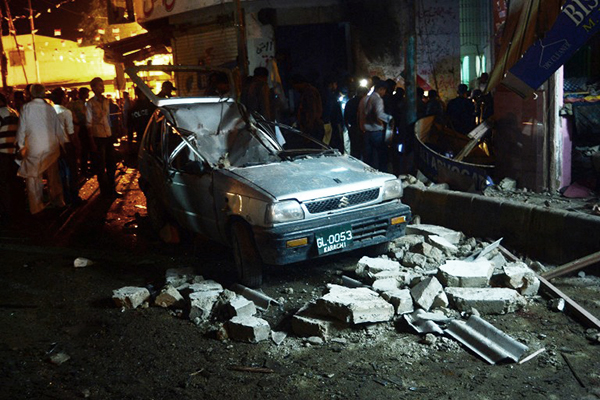 At least six people are dead and nine injured from yesterday’s elections-related attacks.

Five people were killed and eight injured late Thursday in Karachi when a bomb exploded outside a campaign office of the Muttahida Qaumi Movement party, police said. “The bomb was planted on a motorbike,” said senior police official Amir Farooqi. Another police official, Javed Ahmad, said the target of the attack was the MQM.

MQM spokesman Qamar Mansur said that the office was closed following a bomb blast on Tuesday which killed four people. “All the victims were standing outside the office when the bomb exploded,” he said. The party was a coalition partner in the recent government and has been threatened by the Pakistani Taliban, who claimed responsibility for this latest attack.

Earlier in the day, a grenade attack on an election office in Balochistan killed one person and injured another, officials said.

Senior government official Shah Irfan said two men riding a motorcycle threw the grenade at the election office of Sardar Umar Gorgage, a provincial leader in the Pakistan Peoples Party, which is seeking reelection on May 11 after five years in power. Irfan said the attack took place in Nushki district, some 170 kilometers west of Quetta.

Like the MQM, the PPP and another coalition partner, the Awami National Party, have been directly threatened by the Taliban. At least 16 people were killed on Terror Tuesday, April 16, with attacks reported in three of the country’s four provinces. That day’s worst attack took place in Peshawar at an Awami National Party rally, apparently targeting Haroon Bilour, the son of Bashir Bilour, who was assassinated by the Pakistani Taliban on Dec. 22.

Based on the tally provided yesterday by rights group Amnesty International, the total number of people killed from elections violence stands at 43, the total injured number 192.