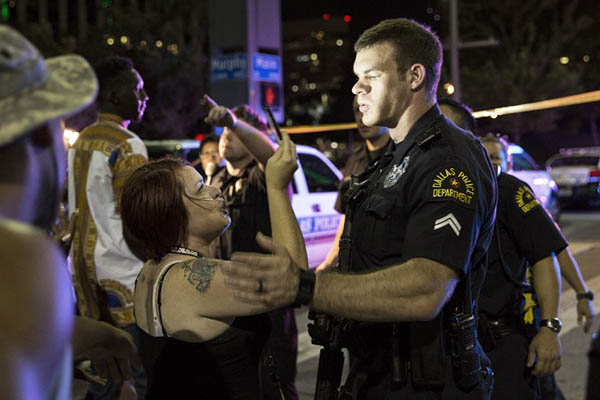 Snipers shot dead five officers and wounded seven others during a protest against police brutality in Dallas, in what U.S. President Barack Obama on Friday called a “vicious, despicable and calculated” attack.

A suspect was reportedly killed in a shootout with police, who placed Dallas on lockdown while they conducted “extensive” sweeps of the city center amid reports of bombs planted downtown.

The shootings, which police described as a “terrorist incident,” sparked chaotic scenes of people running for their lives during a march by several hundred demonstrators to protest the fatal shootings this week of two black men by police elsewhere in the country. It was the biggest single loss of life for law enforcement in America since the September 11, 2001 attacks, and appeared likely to further strain already tense race relations in the country.

Two civilians were also wounded. Local media identified one of them as Shetamia Taylor, 37, saying she was shot in the leg while attending the protest with her four sons.

One witness at the rally spoke of “complete pandemonium,” in an area close to the site where president John F. Kennedy was killed in 1963. “There was blacks, whites, Latinos, everybody. There was a mixed community here protesting. And this just came out of nowhere,” Cory Hughes, a protest organizer, told CNN. “I’m still kind of startled, shaken up. As you know being in the front, it’s almost like the gunshots were coming at us. It was complete pandemonium… It’s bananas.”

After a protracted standoff during which police traded fire with the suspect at a downtown garage, CNN cited a police source as saying one suspect was killed, although some local media outlets said he had shot himself.

CNN reported that a SWAT team of elite police marksmen and bomb-sniffing dogs had been deployed to the scene and stun grenades were used.

The suspect “has told our negotiators that the end is coming, and he is going to hurt and kill more of us, meaning law enforcement. And that there are bombs all over the place in this garage and in downtown,” Police Chief David Brown told reporters. Dallas Police Major Max Geron said on Twitter that officers were conducting “extensive” sweeps across the downtown area of the usually bustling Texas city. Bus and rail service was scrapped for the area, with flight restrictions in place.

Speaking in Warsaw, where he is attending a NATO summit, Obama said that multiple suspects had targeted the officers. “There has been a vicious, calculated and despicable attack on law enforcement,” Obama told reporters. “Let’s be clear. There is no possible justification for these kinds of attacks or any violence against law enforcement.”

As the rally was winding up, shots rang out around 9:00 p.m., causing panic among the protesters, who scrambled to take cover. Brown said two snipers shot at police ambush-style “from elevated positions.”

Three other suspects were taken into custody—one woman and two men found with camouflage bags in a car, though Brown warned there could be more suspects.

Another man turned himself into the police after the authorities tweeted a picture of him wearing camouflage and an assault rifle slung across his shoulder, with a call for information on his whereabouts. It is legal for those with permits to openly carry weapons in the state of Texas. The man, named as Mark Hughes, was later released. His lawyers said he had already received thousands of death threats.

Dramatic video of the shooting emerged from witnesses, who posted the footage online. Bursts of gunfire and police sirens could be heard in the videos. Ismael DeJesus, who filmed the attack while hiding in the Crown Plaza Hotel, described how one of the gunmen shot an officer on the ground.

“It looked like an execution, honestly. He stood over him after he was already down. Shot him maybe three or four more times in the back,” he told CNN.

In another video, posted by Twitter user @allisongriz, one witness can be heard saying: “Oh, my God. There are people laying on the ground. I hope they’re just hiding.”

The protest was one of several nationwide over the deaths of Alton Sterling in Louisiana and Philando Castile in Minnesota that have prompted Obama to make an emotional appeal for urgent police reform. Thousands marched in protest in Atlanta, Chicago, Los Angeles, Saint Paul, Washington and other cities late Thursday, with more than 1,000 protesters gathering in New York’s Time Square.

Mayor Mike Rawlings spoke of a “heartbreaking morning” for Dallas. “We as a city, we as a country, must come together, lock arms and heal the wounds that we all feel from time to time. Words matter. Leadership matters at this time,” he said.

Brown initially said two of the injured officers were undergoing surgery and three were in critical condition. The condition of the other officers was unclear.

Among the officers killed was Dallas Area Rapid Transit officer Brent Thompson, 43, the agency said, adding he was the first DART officer killed in the line of duty.

Outside Parkland Hospital, police saluted their fellow officers who lost their lives or were wounded in the shooting. Other people later joined the officers for an impromptu vigil, their hands grasped behind their backs.

Words of support and concern came pouring in for the police. “As this situation continues to unfold, I’m praying for the brave men and women of the @DallasPD and those in downtown Dallas,” Republican Congressman Pete Sessions said on Twitter.

Criticism of the civil rights movement Black Lives Matter behind the protests against police brutality also came swift. “This is now war. Watch out Obama. Watch out black lives matter punks. Real America is coming after you,” former Republican congressman Joe Walsh wrote in a tweet that was later deleted after he came under heavy criticism for his comments.

No ‘Deal’ for the Opposition, Vows Imran Khan