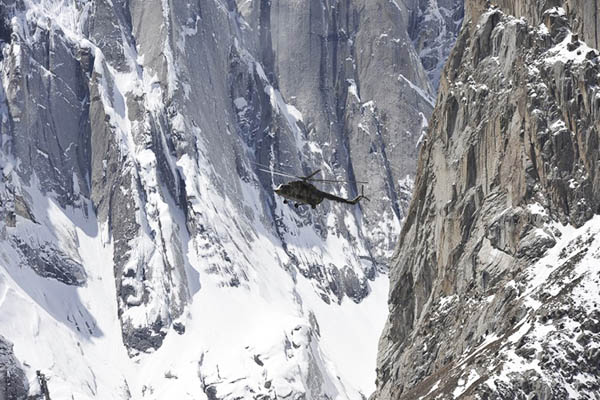 At least four soldiers killed after snow slide buries base camp in Astore region of Gilgit-Baltistan.

At least four soldiers were killed when an avalanche struck a base camp in northern Pakistan, the military said on Wednesday.

The incident happened in the snow-covered Astore area that falls in the territory of Gilgit-Baltistan, also claimed by India as part of the disputed Kashmir region.

“At least 26 soldiers came under a huge snow slide Tuesday night near Astore. Despite extreme weather hazard, 22 soldiers were evacuated through heroic efforts while four soldiers embraced shahadat (martyrdom),” the military said in a statement.

Indian police also reported that at least six people had been killed in avalanches and heavy snowfall in Indian-administered Kashmir.

Snow slides in Astore and surrounding areas are common. At least 140 Pakistani soldiers were buried two years ago by an avalanche at the high-altitude Gayari base. The base sits just below the Siachen Glacier, known as the “world’s highest battlefield,” where Pakistani and Indian troops have faced off in extreme conditions since the 1980s. The incident sparked a bout of national mourning with military rescuers digging in tunnels in the hard mass of the snow and ice that hit the battalion headquarters of the 6th Northern Light Infantry to try to recover the bodies.

Several foreign specialist teams from Norway, United States, Germany and Switzerland had also participated in rescue and recovery operations, which lasted well over one year.