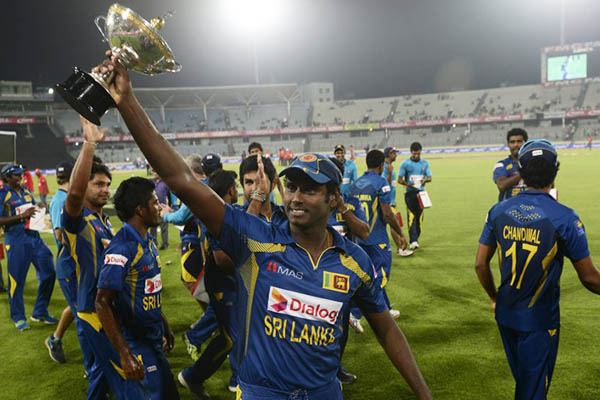 Sri Lanka thumped Pakistan by five wickets in the final to lift the Asia Cup at Sher-e-Bangla stadium in Dhaka on Saturday.

Sri Lanka chased down a challenging 261-run target in 46.2 overs with opener Lahiru Thirimanne notching a brilliant 101. Defending champions Pakistan had posted a tough 260-5 with Fawad Alam hitting a maiden hundred with 114-not out.

Thirimanne, who also scored a hundred in the tournament’s opening match against the same opponents, hit 13 boundaries during his 108-ball knock and steadied the chase during a solid 156-run third-wicket partnership with veteran teammate Mahela Jayawardene, who made 75.

“We wanted to break the barrier between us and finals,” said skipper Angelo Mathews of Sri Lanka’s failure to win the World Cup finals of 2007 and 2011 and the Twenty20 finals of 2009 and 2012. “The credit goes to the whole team. It was a very good run chase and big victory not only for me but for the whole team,” said Mathews whose team won all the five matches in the event.

Pakistan captain Misbah-ul-Haq blamed defeat on his side’s loss of early wickets. “I think losing the first three wickets quickly put us under pressure and although we managed to reach 260, it was some 20-30 short,” said Misbah.

Pakistan, who decided to bat after winning the toss, were helped to 260-5 by a brilliant unbeaten 114 by Fawad Alam and a solid 65 by Misbah.

Alam’s knock helped Pakistan recover from early devastation caused by paceman Lasith Malinga, who took the first three wickets to force Pakistan on to the back foot, before he finished with 5-56.

Alam added an invaluable 122 for the fourth wicket with Misbah and then another 115 for the fifth wicket with Umar Akmal who made a 42-ball 59. Alam, who returned to the team with a brilliant 74 against Bangladesh on Tuesday after a four-year absence, hit eight boundaries and three sixes off 134 balls.

Alam became the first left-handed Pakistan batsman, other than openers, to hit a one-day century. He hit paceman Thisara Perera over long-on for a six to reach his century off 126 balls.