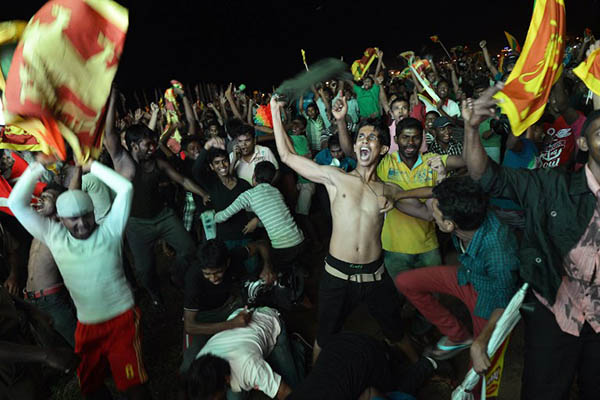 Victory marks first time in 18 years that Sri Lanka has won a world title in cricket.

Kumar Sangakkara hit a memorable half-century to help Sri Lanka to a six-wicket victory over India in the World Twenty20 final in Dhaka on Sunday.

The veteran left-hander scored 52 runs over 35 balls in his last Twenty20 match to guide the Sri Lankan chase of a modest 131-run target in 17.5 overs at a packed Sher-e-Bangla stadium.

Thisara Perera hit Ravichandran Ashwin for a winning boundary to seal the win, finishing with 21 not out. But it was Sangakkara who anchored the chase with six boundaries and a six in his unbeaten knock. The victory gave Sri Lanka their first world title in 18 years since winning the World Cup crown in 1996 and gave the World Twenty20 a fifth champion in as many editions.

The victory also broke Sri Lanka’s jinx of losing the final of major world level events as they had lost two World Cup finals (2007 and 2011) besides being runners-up in as many World Twenty20 events in 2009 and 2012.

“It’s been a long time coming, (we’ve) waited five finals,” said Sangakkara, who was captain in the 2009 World Twenty20 and 2011 World Cup, but will now quit Twenty20 along with Mahela Jayawardene. “I am pretty happy that I was able to do something for the team. It means a lot to all of us. We are very humbled by this.”

India won the inaugural edition in 2007 followed by Pakistan (2009), England (2010) and the West Indies (2012). In contrast India were denied a chance to become the first team ever to hold three major cricketing titles at one time, after clinching the 2011 World Cup title and the Champions Trophy last year.

India captain Mahendra Singh Dhoni was full of praise for Sri Lanka. “It was a perfect game for them,” he said. “In the middle overs our batsmen tried our best, but we couldn’t convert the good start. We were short of a few runs but Virat has been brilliant,” said Dhoni of Kohli, declared player of the tournament.

Sri Lanka lost wickets at regular intervals as Indian spinners applied pressure, but Sangakkara held one end intact. Opener Kusal Perera went for five and Tillakaratne Dilshan for 18 before Sangakkara added 34 for the third wicket with Jayawardne (24) and another 54 for the unfinished fifth wicket with Thisara.

India were reduced to 130-4 by some tight Sri Lankan bowling despite a brilliant half-century by Kohli, whose 58-ball 77 was his eighth Twenty20 half-century (and fourth of this tournament) after India were sent into bat in a match reduced by 40 minutes due to rain.

The rain spiced up the pitch for bowlers but Kohli was at his best when he came to the crease after India lost Ajinkya Rahane (three) in Angelo Mathews’s second over of the innings. Let off by Lasith Malinga at mid-wicket off left-arm spinner Rangana Herath’s first delivery when 11, Kohli took full advantage of the lapse by hitting five boundaries and four sixes before he was run out off the final delivery.

Kohli added 60 for the second wicket with Rohit Sharma (29) and another 55 for the third with Yuvraj Singh who slowed down the tempo with a snail-paced 11 off 21 balls. Sharma hit three boundaries during his 26-ball knock before he was caught off Herath who finished with 1-23 in his four overs.

So facile were India’s last four overs that there was no boundary and a well-set Kohli got just seven balls to play, restricting their total badly. With the win Sri Lanka also capped a long two-and-a-half month tour of Bangladesh during which they won all matches in a bilateral series against the home team and five-nation Asia Cup.