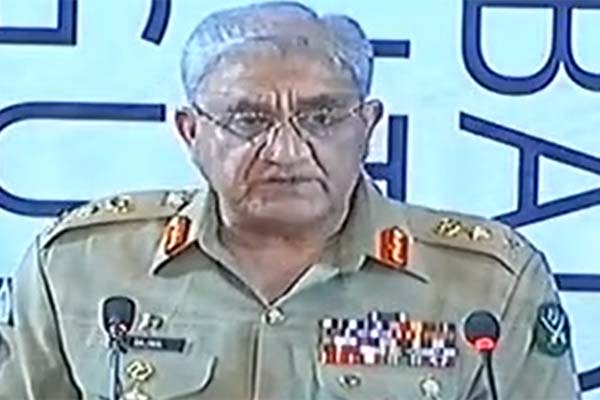 “This potential, however, has remained hostage between two nuclear neighbors,” he said, referring to Pakistan and India. “The Kashmir issue is at the heart of this. It is important to understand that without the resolution of the Kashmir dispute through peaceful means, the process will always remain susceptible to derailment to politically motivated bellicosity,” he added in his address to the National Security Dialogue in Islamabad.

“We feel it is time to bury the past and move forward,” he said, but stressed the onus for it rested with India. “Our neighbor will have to create a conducive environment, particularly in occupied Kashmir,” he added.

Echoing Prime Minister Imran Khan, the Army chief said national security was no longer restricted to the domains of internal and external threats, and also comprised development and human security. “It [national security] is not solely a function of the armed forces alone,” he said.

Noting that “unsettled issues” in South Asia were dragging the entire region back into poverty and underdevelopment, he stressed the need for countries to work together to face various challenges such as terrorism and the coronavirus pandemic. “Responding in silos is no longer an option,” he said.

Referring to global “setbacks” such as the World Wars and the Cold War, he said history had taught us that progress could only be achieved through an interconnected and interdependent sense of security. He urged the global community to enhance bilateral ties and move toward a convergence of ideals that would benefit everyone.

The chief of the Army staff said Pakistan, like other countries of the region, was facing “multidimensional challenges” that could not be tackled without support. “It is sad to know that even today it [South Asia] is amongst the least integrated regions of the world in terms of trade infrastructure water and energy cooperation,” he said, adding that despite this regional states end up spending large sums on their defense at the expense of human development.

He claimed that “despite rising security challenges, Pakistan has been one of the few [nations] that has resisted the temptation of involving itself in an arms race,” referring to a decrease in the country’s defense expenditure. “Today the leading drivers of change in the world are demography, economy and technology. However, one issue that remains central to this concept is economic security and cooperation. Frayed relations between various powers centers of the globe and boomeranging of competing alliances can bring nothing but another stint of Cold War,” he warned.

The Army chief said Pakistan was ready to resolve all outstanding issues with its neighbors, adding this was a “deliberate” choice and was not a result of any “pressure.” He said the main goal was to project Pakistan as peace-loving nation on the global stage.

“We have learned from the past and are willing to move ahead in the future,” he said. “However, all this is contingent on reciprocity,” he added.

Talking about the China-Pakistan Economic Corridor, Gen. Bajwa said it had been at the heart of the country’s economic transformation plan and “we have left no quarter to clear its necessities to address our economic problems.” He said the country hopes to make it “inclusive, transparent and attractive for all global and regional players” with an aim to mutually benefit. “Let me also emphasize that while CPEC remains central to our vision, only seeing Pakistan through the CPEC prism is also misleading.”

Gen. Bajwa said the world now recognizes Pakistan as an important country due to its geostrategic location. He praised the country’s “robust role” in the Afghan peace process, adding that it was reflective of Islamabad’s understanding of its moral responsibilities. He said Pakistan’s untiring efforts had helped achieve an historic deal between the Taliban and the U.S. last year, adding this had eventually led to intra-Afghan dialogue.

The Army chief said Pakistan would continue to provide “all-out support” for the Afghan peace process, adding that Islamabad has taken steps to connect Kabul with other countries. He said Pakistan had also allowed Afghanistan to use the Afghan transit trade and transport goods to India.