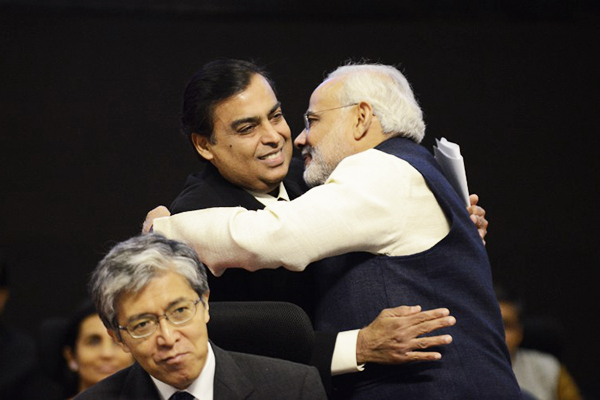 India’s home ministry approved the move, the Times of India said, two months after a letter threatening to harm Ambani was hand-delivered to his office in Mumbai, allegedly from the banned Indian Mujahideen militant group.

The businessman will now be accompanied by vehicles containing commandos armed with sophisticated weapons wherever he travels in the city or elsewhere in India, the Press Trust of India news agency said. The Central Reserve Police Force has earmarked a 28-member team for the task, according to PTI.

A Reliance spokesman declined to speak on the matter and Mumbai police were not immediately available for comment.

Anticorruption campaigner Arvind Kejriwal was among those unimpressed by the move. “Such a rich man can’t hire his own security guards. And no media had the courage to question this?” he wrote on Twitter.

The Indian Mujahideen had reportedly threatened to harm Ambani for backing Hindu nationalist Gujarat Chief Minister Narendra Modi, who is expected to make a bid to become prime minister in polls next year.

Reliance is a major investor in Gujarat, the scene of anti-Muslim violence in 2002 soon after Modi became leader, which left around 2,000 people dead. The letter also accused Ambani of grabbing public land intended for the Muslim community to build his 27-story residence in the city, believed to be the world’s most expensive private home, reports say. PTI said the city police force was also planning to strengthen security around Ambani’s Mumbai tower.

Worth an estimated $21.5 billion, Ambani ranked at No. 22 on this year’s Forbes’ list of global billionaires. His younger brother, Anil, came in at No. 233 with an estimated fortune of $2.6 billion.