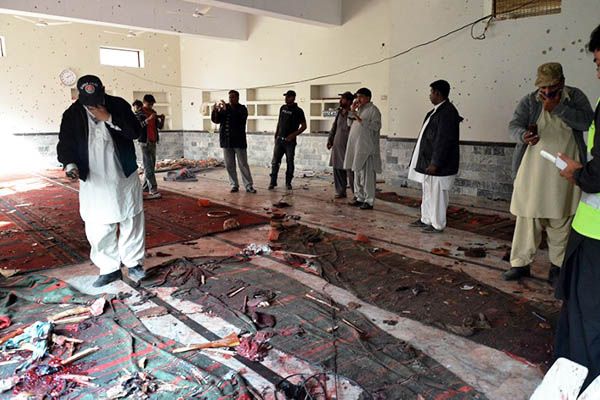 A suicide attack on an imambargah (mosque) in the Shikarpur district of Sindh province on Friday killed at least 43 Shia Muslims, including four children, and injured over 50, according to local authorities.

A senior police official from the region, Allah Baksh, confirmed the attack and casualties. “Initial evidence suggests it was a suicide blast targeting Shia Muslims in the Lakhi Dar area of Shikarpur,” he said. “People were offering Friday prayers inside the imambargah when the attacker detonated his explosives,” he added.

According to the police official, some of the casualties occurred as a result of a subsequent stampede. “Many people tried to rush the main gate and leave the mosque when the attack happened,” he said.

Baksh said police had cordoned off the area and the bomb disposal squad had been deployed to determine the quantity of explosives used in the attack. “It appears the terrorist entered the imambargah shortly after Friday prayers began and detonated his suicide jacket when everyone was praying,” he added.

“We have received 10 bodies so far, including two children, and 30 injured,” said Iqbal Kazmi, a rescue official with the non-profit Edhi Rescue Services. “We are facing a shortage of staff to respond to the crisis, as we don’t have many workers in Shikarpur,” he added. “The imambargah is also located in a congested area making it difficult to conduct rescue operations. Locals have been helping us recover the dead and wounded.”

Eyewitnesses said the imambargah had become an abattoir. “There were bodies everywhere,” said Aal-e-Hussain, one of the survivors of the blast. “I saw at least 14 dead myself and could not even count the injured,” he added. Another eyewitness, Ashiq Ali, said his son had been injured in the blast but was now being treated in hospital.

“I was offering the Friday prayers when a powerful explosion occurred,” he said. “I saw dust all around me and when I looked up, I found my son lying injured beside me,” he added. “Thanks to a friend, I was able to quickly bring my son to the Civil Hospital Shikarpur.”

Prime Minister Nawaz Sharif condemned the attack through a statement issued to media. “The nation is united against terrorism and we will root out it from this region,” he said. He also directed the Sindh government to ensure the injured had access to the best medical facilities.

Sharjeel Memon, the information minister of Sindh province, confirmed the blast had been a suicide attack. “I can confirm that at least 12 people are dead and over 50 injured, but the count is likely to rise,” he added.

Jam Mehtab, the health minister, said the Civil Hospital Shikarpur could not handle all the injured and the critically wounded had been transferred to the Larkana Hospital. “I urge people of the region to donate blood for the wounded,” he added.

The barbaric killing of innocent peoples are growing day by day! No one knows what the terrorists or so called religious fanatics want. It looks like that their hearts are out of God’s fear and even they don’t think even of children or women. For God’s sake please stop this brutality of killing innocent & naive people.