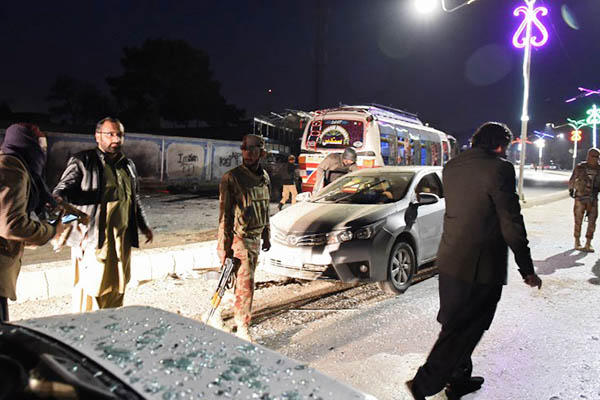 At least six people killed, another 16 injured after bomber on motorcycle rams vehicle into police bus

At least six people, including five policemen, were killed in Quetta when a suicide bomber rammed into their bus on Tuesday, injuring 16 people, police said.

The attack took place near the legislative assembly of Balochistan province of which Quetta is the capital.

“At least five policemen and a pedestrian were martyred and 16 others were wounded when a suicide bomber on a motorcycle struck the bus,” said senior police official Abdul Razzaq Cheema.

There were no immediate claims of responsibility for the attack, he added.

Police and troops have been battling Islamist militants and separatist groups in mineral-rich Balochistan for more than a decade. Balochistan, bordering Iran and Afghanistan, is the largest of the country’s four provinces but its roughly seven million people have long argued they do not get a fair share of its vast gas and mineral wealth.

The province is Pakistan’s most restive region, afflicted by Islamist militancy, sectarian violence, and the separatist insurgency.