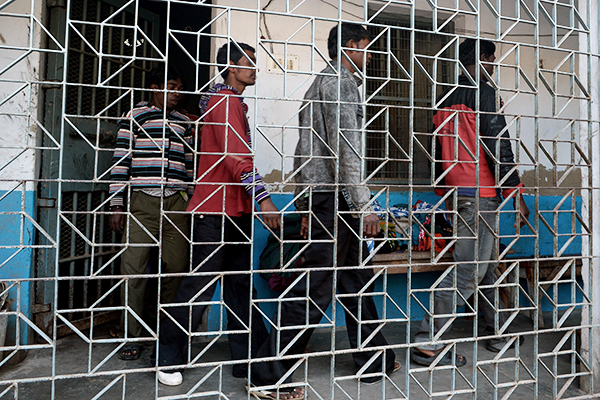 Thirteen men arrested over the alleged gang-rape of a woman in India for “dishonoring” her community appeared in court on Friday as a village elder accused of ordering the punishment insisted he was innocent.

As India’s chief justice ordered an inquiry into the incident, which has further fueled public anger over levels of sexual violence, the victim’s neighbors described her as a charming woman who had planned to marry.

Police and prosecutors said the 13 accused were produced before a court in West Bengal’s Birbhum district over allegations that the 20-year-old woman was repeatedly assaulted for being in a relationship with a Muslim man.

The defendants include the head of the tribal council in the village of Subalpur, 58-year-old Balai Mardi, who is alleged to have ordered the mass sexual assault after her parents were unable to pay a fine. But speaking from his cell, a furious and unshaven Mardi denounced the charges against him: “It’s a conspiracy to falsely implicate me.”

While the 13 were remanded in custody, all the other male residents appeared to have fled Subalpur, leaving nervous women and children who were reluctant to speak to visiting journalists. “She was charming and well-behaved,” said Laxmi Murmu, 45, who lives next door to the victim’s hut. “The boy promised to marry the girl soon. But the village council did not accept this as the boy was Muslim.”

Police in the area said that a mob had surrounded the victim’s house after her ordeal and attempted to intimidate her. “Members of the village council threatened her with dire consequences if she lodged a complaint with the police,” said police officer Kazi Mohammad Hossain. “She was limping and bleeding when she came to the police station,” he said.

The victim, who spoke to journalists on Thursday to confirm that she had been gang-raped, is in the local Suri Sadar hospital where superintendent Asit Kumar Biswas said she was “recovering.”

The gruesome new case has again highlighted India’s problems with sexual violence after the fatal gang-rape of a student in New Delhi in December 2012 sparked angry protests about the treatment of women.

Councils made up of village elders, usually known as “Khap Panchayats,” are common in rural parts of India, especially in the north, where they are often accused of dispensing “Taliban-style justice.” Their diktats are often unconstitutional and illegal, but they continue to hold sway with rules seen as regressive by women’s rights activists. So-called “honor killings,” when a woman is murdered by her male relatives for failing to uphold tradition, also continue despite government efforts and social campaigns to stamp out the practice.

Speaking in court on Friday, India’s Chief Justice P. Sathasivam said he was “very disturbed” by the case and ordered the local district judge to visit the village and submit a report within a week.

“We are living in constant fear because of the whimsical and irrational behavior of the village council,” said 50-year-old Sukul Soren, a resident of the mud-hut village set amid palm trees and fields of rice and mustard. “We want a change in the system.”

About a dozen policemen stood outside the small bamboo structure with a thatched roof where Tuesday’s crime allegedly took place. Neighbors said the building was used by the village head as a kitchen. Police say the elders initially fined the victim’s family Rs. 25,000 for her relationship, but they were too poor to pay.