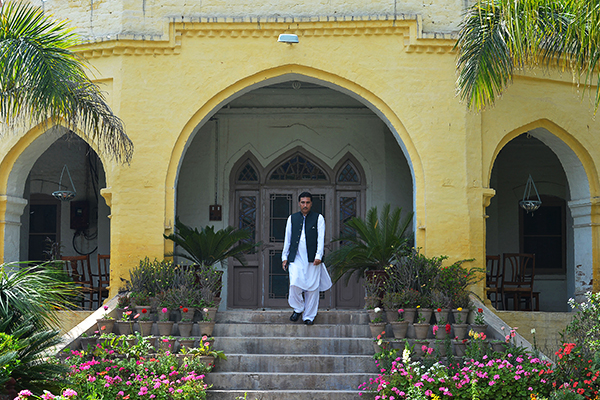 For politicians in most countries, switching parties is a once-in-a-career move made only after careful thought. But in Pakistan, changing sides to gain advantage is standard practice.

Since entering politics in 1996, Arbab Khizer Hayat has switched his party allegiance 14 times, and he is far from alone. Dozens of others have done so. And as the May 11 elections approach, the trend is increasing.

The hallway of Hayat’s house in Peshawar is adorned with pictures of him with former president Ghulam Ishaq Khan. And former prime minister Benazir Bhutto. And former prime minister Nawaz Sharif. Hayat, a member of a landowning family with a long history in politics, has gone from the Pakistan Tehreek-e-Insaf of former cricketer Imran Khan to Bhutto’s Pakistan Peoples Party to Sharif’s Pakistan Muslim League (Nawaz).

He has managed to stick with Sharif’s party for the past two years. “When I went back to the PMLN, Nawaz rang me and joked: ‘How long are you staying with us this time?’” said Hayat, 38, with an infectious grin.

The phenomenon of politicians jumping ship is so familiar that Pakistanis have a nickname for them—“lota,” the Urdu word for a round-bottomed water jug that can rock in all directions without falling over. Hayat is quite candid about his changeability: “Politics is not about ideas, but about power. When politicians see a party becoming popular they want to join it.”

In Pakistan’s stratified, semi-feudal society, patronage and kinship play a huge role and dominate over ideology in politics. Candidates choose the banner under which they have the best chance of being elected, while parties court powerful individuals in areas where the person’s name and influence can secure more votes than any party.

“We have two types of politicians. Half are loyal to parties. So if they are rightwing or leftwing they are very loyal to the ideology, but the other half is opportunist,” said analyst Raza Rumi. “Rich people who makes lots of money, people who own land or who are influential, they choose the party, a ticket where they are likely to win.”

This back-and-forth movement between parties has accelerated in recent weeks as elections for the national and four provincial assemblies near.

Nabil Gabol, elected to the recently-dissolved National Assembly in 2008 from the troubled Lyari neighborhood of Karachi, switched from the PPP to the Muttahida Qaumi Movement in March. There have also been moves by some M.P.s from the outgoing PPP to join the PMLN as its stock has risen.

“We had a lot of expectations, that the PPP will be able to address the problems being faced by Balochistan, but despite our repeated requests they did not take it seriously,” said Lashkari Raisani, a former M.P. from Balochistan who switched from the PPP to PMLN last month.

According to a recent Gallup Pakistan poll, PMLN will win the most number of seats at the ballot box next month, but like the PPP in 2008, not enough to secure an outright majority.

“In a country where it’s sometimes hard to trust opinion polls, the ‘lotas’ are a good indicator of trends,” said a Western diplomat. In this game of electoral musical chairs, those who cannot get their hands on a ticket from one of the big parties run as independents or try to sidle up to one of the emerging parties, such as PTI.

Hayat is sitting out the election this time as he says he does not have the money to pay campaign expenses—salaries, media advertising, and food for meetings. But he hopes to become a political adviser if his party is elected. “It’s my last party, I won’t leave and I’ll even stand in elections for them next time,” he said, hoping to have finally picked the right side.