Take Your Pick in Afghan Polls 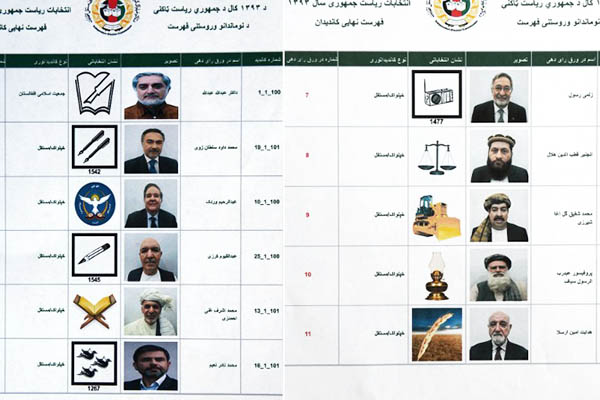 Candidates’ symbols reflect their hopes and aspirations as race for elections heats up.

Parachute or laptop computer? Sunrise or binoculars? Five days before polling, Afghan voters are spoilt for choice as they prepare to make their selection from an oddball array of candidates’ symbols.

The designs help illiterate voters differentiate between hundreds of contenders standing in presidential and provincial council elections on April 5, a decade after the first polls of the country’s post-Taliban era.

Ballot papers have options ranging from the humble kettle and the sacred prayer mat to an office chair, a fearsome lion, an elegant butterfly and an unexpected basketball net. Other eye-catching designs include paint brushes, naan bread, a calculator, a ladder, parrots, a pencil sharpener and, in land-locked Afghanistan, a sailboat in full rig.

The symbols are decided through a mixture of candidate preferences and allocation by the Independent Election Commission (IEC), which is organizing the vote. Eight candidates in the race to succeed President Hamid Karzai have launched nationwide poster campaigns that prominently feature their personal symbol.

“We chose the radio because each Afghan family has at least one radio in their home, and it is the key source of information in the villages,” said Javed Faisal, spokesman for leading presidential hopeful Zalmai Rassoul. “Our symbol shows that we believe people should know about the candidates, their manifestos and their policies. It also means we believe in democracy, freedom of speech and the media.”

Before the campaign began in early February, all the presidential teams gathered at the IEC to select their symbols, with Rassoul given the choice between an umbrella and a radio, according to his officials. Ashraf Ghani stuck to the same symbol as in his unsuccessful 2009 campaign—the Quran, which might be perceived as an unfair choice in a devout Muslim nation such as Afghanistan.

“We have not heard any complaints,” said Hamidullah Farooqi, a member of Ghani’s campaign team. “If anyone thinks our sign is problematic, I think that is un-Islamic of them. This nation has huge respect for the Quran. The commission gave candidates the chance if they wanted to have their own signs, and we took advantage of this opportunity.”

One runner who certainly embraced the idea was Gul Agha Sherzai, who glories in his nickname of “the bulldozer,” which he earned for pushing though major road and infrastructure projects—as well as for his forceful personality. “Sherzai is the champion of construction in Afghanistan,” said Fraidoon Kakar, his spokesman, explaining the team’s symbol of a smart yellow bulldozer. “He earned the nickname when he worked day and night to finish the road from Kabul to Laghman in 28 days. (As governor of Nangarhar province) he spent millions of dollars and built most of the roads that exist today.”

In contrast, Abdullah Abdullah, a front-runner this year who came second in 2009, went for a sober pen and paper. “It shows culture, thought, ability and civilization,” said campaign spokesman Sayed Fazil Sancharaki. “We got it in the lottery, and we liked it, and had no objection.”

While President Karzai’s brother Qayum Karzai (pencil) and Abdul Rahim Wardak (dove and two swords) have dropped out since the ballot papers were printed, those still in the race include Abdul Rab Rasoul Sayyaf (oil lamp) and Hedayat Amin Arsala (head of wheat).

The simultaneous elections for council seats in Afghanistan’s 34 provinces demand plenty of imagination to dream up symbols for each candidate, with 457 people running in Kabul province alone. Among the highlights are ladders, cassette tapes, buckets, envelopes, footballs, satellite dishes, petrol pumps and hair combs.

“We had a specific person to do this job,” said election commission spokesman Noor Mohammad Noor. “Using a big archive that we have developed from previous elections and from elsewhere, we gave each provincial candidate five options and they could choose one. In the presidential race, it was more flexible. If they wanted, they could bring their own symbol, which we then checked. There haven’t been any complaints, so the system has worked well.”

Other developing countries also use election symbols, including Pakistan, Egypt, Bangladesh and India, where carrots, chessboards and violins have been among the designs deployed to tempt the electorate.