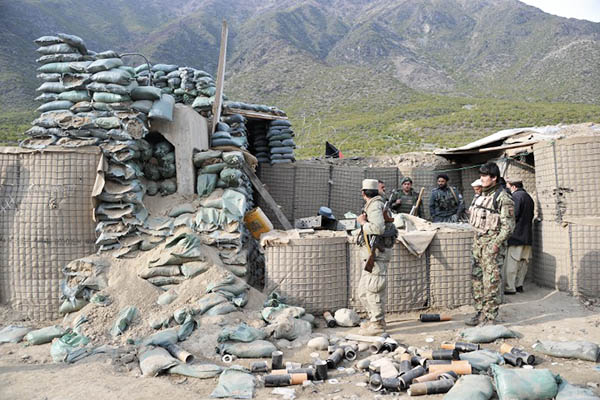 Afghan soldiers at the checkpoint destroyed during clashes with the Taliban. Noorullah Shirzada—AFP

Afghan President Hamid Karzai slammed Pakistan for failing to eliminate “terror nests” after the Taliban killed 21 soldiers and kidnapped seven in a raid on a border outpost early Sunday.

The attack in the eastern province of Kunar was the single deadliest strike on Afghan troops in recent months by the insurgents, and caused Karzai to cancel a planned two-day visit to Sri Lanka. Afghanistan and Pakistan regularly accuse each other of supporting militant attacks in the other country. Karzai’s comments came days after Islamabad said 23 of its kidnapped paramilitary soldiers had been killed on Afghan soil.

Reinforcements were sent to the area to hunt for the attackers and free the kidnapped troops, the defense ministry said. The rebels attacked the reinforcements with a suicide bomb and gun attack but caused no casualties, it added.

A senior official at Afghanistan’s interior ministry who declined to be named said more than a hundred militants “coming from the other side of the border” were involved in the operation. He also said the authorities were investigating if this attack was linked to the killing of the Pakistani soldiers.

Karzai demanded action from Pakistan. “President Karzai once again called on Pakistan government that terrorism is a serious threat against both countries and demanded Pakistan to seriously and strongly cooperate with the government of Afghanistan, and take serious action in eliminating terror nests,” a statement from his office said. Karzai cancelled a trip to Sri Lanka where he had been due to hold talks with his counterpart Mahinda Rajapakse, the Sri Lankan foreign ministry said in Colombo.

Kunar provincial governor Shujah-ul-Mulk Jalala said some of the soldiers in the post were thought to have aided the Taliban. This could not be confirmed and the Taliban did not mention insider help in their statement.

“The mujahideen overran a key enemy outpost in an assault last night in Ghaziabad,” said the statement sent by text message to reporters, terming the Afghan troops “hirelings.”

Afghanistan is gripped by a deadly insurgency that has been waged by remnants of the Taliban since a U.S.-led invasion toppled them from power in 2001. The rebels’ campaign has gathered pace and become more deadly, using a combination of suicide bombings as well as attacks involving multiple individuals storming targets in big cities and fighting until they are killed.

The Western-funded Kabul government is trying to strike a peace deal with the Taliban before the withdrawal of foreign troops by the end of this year. So far, the Taliban have turned down all peace offers from Karzai’s administration.

Afghanistan will go to the polls on April 5 to select a successor to Karzai, as some 55,000 remaining U.S.-led combat troops pull out of the country. Between 8,000-12,000 U.S. soldiers may be deployed on a training and counter-terrorism mission from 2015 if a long-delayed deal is signed with the Afghan government.