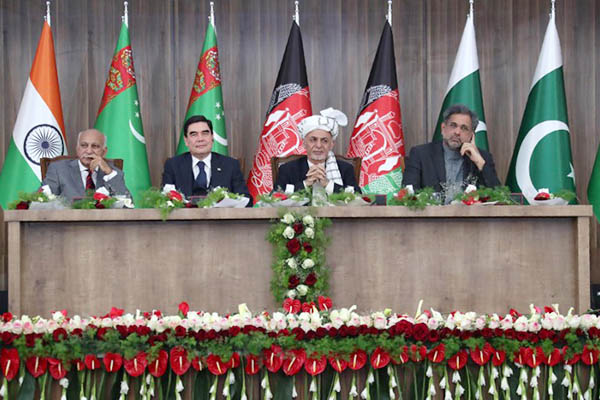 Taliban pledge to cooperate with project, terming it important part of Afghanistan’s infrastructure

Dignitaries, including diplomats from the foreign missions in Turkmenistan, were greeted by Turkmen national songs and traditional nomadic tents serving up food on an overcast day at the border post of Serkhetabat, once the southernmost tip of the Soviet Union.

Ghani said the pipeline would “unite [the] countries” in quotes translated into Russian for reporters at the ceremony. “There were pessimistic voices, but now we are witnessing the construction of the TAPI gas pipeline,” said Ghani, using the acronym for the conduit, which takes its name from the four countries.

The quartet aims to complete the 1,840-kilometer pipeline and begin pumping natural gas from Turkmenistan’s giant Galkynysh gas field by the beginning of 2020.

The pipeline will traverse war-wracked Afghanistan, raising security concerns. The Taliban pledged to cooperate with TAPI on Friday, saying it will be an important element in Afghanistan’s infrastructure. But the bulk of the 33 billion cubic meters of gas to be pumped annually through the conduit will be purchased by South Asian rivals Pakistan and India.

Turkmen strongman Berdymukhamedov, whose country currently depends heavily on China as a market for its natural gas exports, called diversification of gas deliveries an “important part of the politics” of the isolated Central Asian country. And he said work on the Turkmen section of the pipeline was still ongoing.

India’s commitment to the pipeline has previously been questioned over its relationship with Pakistan and easy access to liquefied natural gas markets, which are seen as potential stumbling blocks. But its external affairs minister hailed the project as “a symbol of our goals” and “a new page in cooperation” between the four countries in a speech at the ceremony on Friday.

The overall funding picture for the mammoth pipeline remains unclear, with commercial energy giants such as France’s Total failing to follow up on reported interest in the project.

Turkmenistan sits on the world’s fourth-largest gas reserves but lost a major buyer in Russia after Russian energy giant Gazprom wound down imports of Turkmen gas and then ceased purchases completely in 2016.