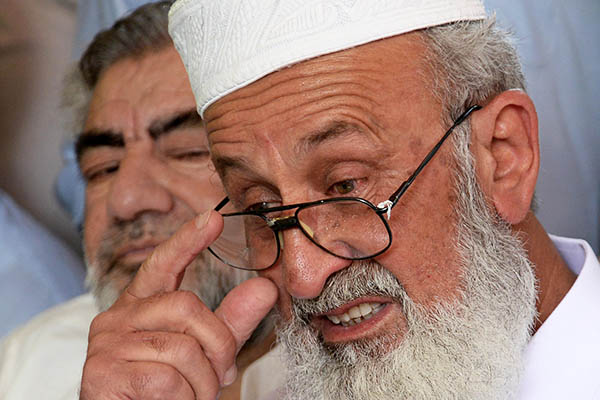 Ajmal Khan, freed after four years of captivity, says he taught the children of the Taliban during his incarceration.

A Pakistani academic freed after four years in Taliban captivity on Friday told how he taught the militants’ children Maths and English and met their feared former leader Hakimullah Mehsud.

The Pakistani Taliban abducted Ajmal Khan, vice-chancellor of Islamia College University Peshawar, the capital of Khyber Pakhtunkhwa province, in September 2010. The military said “security forces safely recovered” the professor, but gave no details of how he came to be freed.

Khan, 63, was similarly reluctant to discuss details of his release but said he was delighted to be reunited with his family. “Thanks be to God, I have come back home,” he told reporters. “They did not torture me, but being away from home is itself a torture. I can’t explain how it is to see my children after four years.”

He said that during his captivity he had spent time with Mehsud, then the commander of the Tehreek-e-Taliban Pakistan (TTP), who was killed by a U.S. drone in November 2013. Khan, who wore a long beard and appeared in good health despite his long captivity, said the militants had treated him well, giving him medication for his heart condition and a radio to let him keep up with current affairs.

He had appeared in several video messages asking the government to negotiate his release with the TTP, which began a bloody insurgency against the state in 2007. Government officials said despite many rounds of back-channel talks in the past, Taliban had refused to release Khan, demanding the release of important Taliban commanders held by security forces.

Khan said he got used to life in the remote locations where he was held and had even helped educate the militants’ youngsters. “I was very worried initially but then I adjusted to the situation—they used to make my contact with my family after every eight or nine months,” he said.

“During the abduction, one day two children came to me and I started teaching them. The number of such children grew and at the end I was teaching English and Maths to 32 of the Taliban’s children.”

Pakistan rights activists, university teaching staff and students in the northwest had protested against Khan’s kidnapping many times but all efforts to recover him were futile. Northwest Pakistan suffers from chronic insecurity, largely connected to the semi-autonomous tribal belt near the Afghan border.

Khan’s release rekindled hopes for the sons of two prominent politicians held by the Talban, but he said he had no news of their fate.

Teaching English and Physics to Taliban’s children defies their popular stance on the content of education .