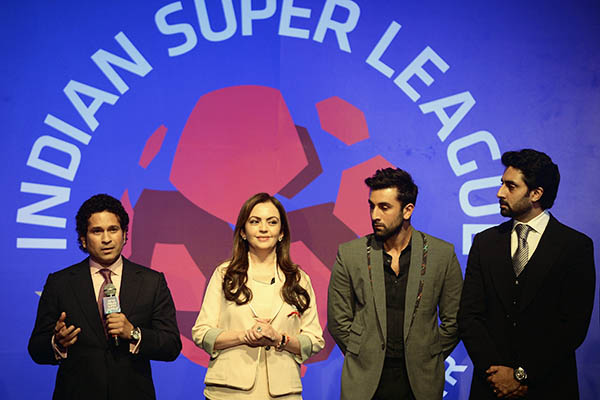 Batting superstar Sachin Tendulkar on Thursday threw his weight behind the upcoming Indian Super League (ISL), saying it was the way forward to unearth football talent in the cricket-mad country.

“There is a lot of sporting talent in the country, but no platform to showcase the talent. Perhaps ISL is the answer,” Tendulkar said in Mumbai at the launch of the eight-city franchise-based tournament to be played in October-December.

Tendulkar, who retired last year as the leading run-getter in both Test and one-day cricket, is co-owner of the Kochi franchise in the new league that has been modeled on the lines of cricket’s cash-rich Indian Premier League (IPL). While the 40-year-old’s fame and fortune is due to his exploits on the cricket field, he said that the most important thing was for Indians to develop and nurture a love of sport. “My vision for India is sport for all. It is not about being professional but staying healthy and fit,” he said.

Meanwhile, Italian World Cup winner Alessandro Del Piero, 39, was set to play for Delhi Dynamos and also serve as a brand ambassador for the ISL, a source associated with the league told AFP. “He is on board, a formal announcement will be made shortly,” the source added.

Del Piero, who has been playing more recently in Australia, will be the biggest star in the league that will also feature former French international David Trezeguet and ex-England goalkeeper David James.

Eight city-based teams are due to take part in the tournament, which runs from Oct. 12 to Dec. 20. Several of the franchises have tie-ups with European football giants such as La Liga champions Atletico Madrid who are the co-owners of Atletico Kolkata.

While India are only 150th in the world rankings, football draws big crowds in some parts of the country and has been dubbed the game’s “sleeping giant” by Sepp Blatter, president of the world governing body FIFA.

The English Premier League (EPL) draws big TV audiences and team owners are hoping to replicate the success of the IPL, the domestic Twenty20 cricket tournament that attracts some of the biggest names in the game. Organized by the All India Football Federation, the ISL is backed by India’s Reliance Industries, which is controlled by the country’s richest man Mukesh Ambani, sports management giant IMG and Rupert Murdoch’s Star TV.

“The Indian Super League is an initiative that aims to revolutionize football in this country,” Mukesh Ambani’s wife Nita, who chairs the organizing committee, told The Times of India in an interview Thursday. “We are a nation of billion-plus but today most Indian fans, including my own two sons, only talk of EPL, La Liga or the Arsenals of the world. We are hoping to build a system to nurture talent and make our own national football heroes. We all are very excited. However, I must say that these are initial years and we are taking baby steps. The road ahead is long before we take football to its deserving place in Indian sport.”

Tendulkar and another recently retired cricket great Sourav Ganguly are among the celebrities who are promoting the tournament while several Bollywood stars are also fronting franchises. While most attention is on the ageing foreign stars, at least five of the starting line-up for each team must be Indian.

Although some of the country’s top players have agreed deals with ISL teams, national captain Sunil Chhetri is among several India internationals who have so far rejected the chance of joining the league. Although the eight-month long I-League has suspended matches during the ISL, several owners have spoken out against the new tournament, saying it risked undermining grassroots football.