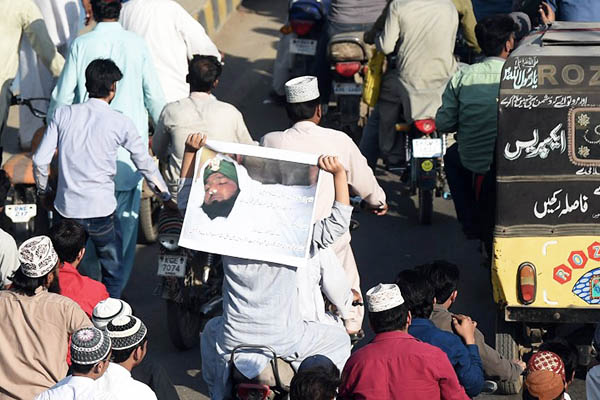 Thousands of police, paramilitary forces deployed to prevent riots ahead of, and following, assassin’s funeral.

Hundreds of supporters of Mumtaz Qadri, executed for gunning down then Punjab governor Salmaan Taseer, gathered for his funeral on Tuesday, sparking fears of violence, as police and troops threw a tight cordon around flashpoints.

Thousands of police were deployed at main junctions and sensitive buildings in Islamabad and Rawalpindi, officials said, including along the route set to be taken by Mumtaz Qadri’s funeral procession.

Roads around Qadri’s home in Rawalpindi remained open, however. An AFP reporter there said up to 800 men and women had gathered as the body was placed in an ambulance to be taken to the funeral, with no security forces in sight. Some of the men were seen carrying sticks.

Qadri, a police bodyguard to Taseer, shot the liberal Punjab governor 28 times at an Islamabad market in 2011. He said he was angry at the politician’s calls to reform the blasphemy law.

Thousands protested in cities across Pakistan on Monday after authorities announced the hanging had taken place early that morning. But with security stepped up at flashpoints across the country of some 200 million, most dispersed peacefully.

“Police have been heavily deployed across the capital today,” said a police official in Islamabad. “We have manned all the main junctions close to the procession route and sensitive buildings,” he said, adding that up to 3,000 officers were on the streets.

All schools and universities remained closed for the day after shutting early Monday.

A police official in Rawalpindi said similar numbers were deployed there, including hundreds brought in from other districts as well as paramilitary Rangers forces.

Liaquat Bagh, the park in Rawalpindi where the funeral ceremony will be held, is tinged with political significance: it is where prime minister Liaquat Ali Khan was assassinated in 1951, and the site of former prime minister Benazir Bhutto’s assassination in 2007.