Home Lightbox The Coup in Karachi 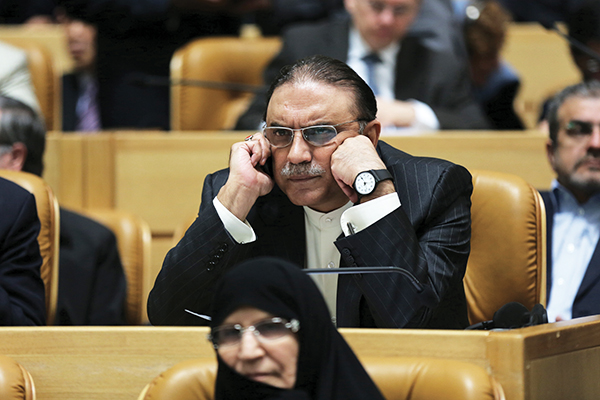 How and why it happened.

The Rangers arrested Dr. Asim Hussain of the Sindh-ruling Pakistan Peoples Party on Aug. 26 on charges of terrorism. The provincial chief secretary is on pre-arrest bail. The National Accountability Bureau is investigating Sindh’s inspector-general of police on charges of corruption; the deputy inspector-general, additional inspector-general and senior superintendent of police are all being probed for their role in the purchase of CCTV cameras, bulletproof jackets, cars, and weapons. The chairman of the chief minister’s inspection team, facing allegations of illegally allotting state land, is also being investigated and is on bail.

The headquarters of the Pakistan Rangers (Sindh) has replaced Bilawal House as the province’s center of gravity. The Sindh Assembly, the Chief Minister’s Secretariat and the Sindh High Court remain now only notional centers of power and authority. The coup in Karachi has happened. It had been in the making for almost two years.

It started on Sept. 5, 2013, when the Rangers were empowered to “lead a targeted operation with the support of police against criminals already identified by federal, military and civilian agencies in hundreds of lists for their alleged involvement in targeted killings, kidnappings-for-ransom, extortion and terrorism.” By November the following year, the operation had moved from being “targeted” to a whole lot more.

On March 11, Nine-Zero, headquarters of the Muttahida Qaumi Movement party, which has long been accused of involvement in terrorist activities, was raided. On May 16, Lt. Gen. Naveed Mukhtar, commander of V Corps, said the “fight is against terrorists, extortionists, target-killers, kidnappers and other criminals.” On June 15, the Rangers raided the Sindh Building Control Authority, marking a major expansion of the operation. The following day, the former president and PPP’s co-chairman reacted. Asif Ali Zardari’s outburst was meant to stop GHQ in its boots. It didn’t work, and Zardari left for Dubai. On Aug. 12, MQM’s lawmakers submitted their resignations in the national and provincial assemblies. These were also meant to stall GHQ’s role expansion; these, too, didn’t work.

The Army’s interest in Karachi appears to be showing results. In 2013, 2,507 murders took place in the city and 174 kidnappings-for-ransom. Since the start of this year, terrorist violence is down 40 percent from last year, suicide attacks down 55 percent, and bombings down 60 percent. Average monthly killings are down from 95 to 45; and annual kidnappings from 115 to 14. This has encouraged the Army to broaden their cleanup operation.

On Aug. 25, according to a press release from the military, the Army chief, Gen. Raheel Sharif, “approved an increase in the number of military courts in Karachi” and “directed to break [the] evil nexus [between] terrorism, criminal mafias, violence and corruption to ensure [a] peaceful and terror-free” Karachi. The next day, the Rangers picked up Dr. Hussain, signaling the shift of focus from terrorism to alleged corruption.

The PPP knows the trouble it’s in. On Aug. 31, Zardari blamed Prime Minister Nawaz Sharif, and not the Army, for its latest woes. “The politics of revenge should immediately be stopped otherwise it will produce disastrous consequences,” he said. But the old narrative of political victimization, whether true or not, is finding few takers because the Sindh government has failed, despite being in power since 2008, to provide security, stability and services. The governance vacuum created by the PPP’s apparent apathy or inability could not defy the laws of nature. The void has sucked in the Rangers. Perhaps to the point of no return.

what one should say? It is a fact that Sindh Govt has proved to be a bunch of naive buffoons and that says it all. The lofty claims of PPP govt proved fake and corruption is rampant and visible. Prove one allegation of corruption and misgovernance wrong.

After cleaning corruption of MQM and PPP from Karachi, Pakistan will become Number 1 corruption free country in whole world. Just because of MQM and PPP, world thought whole of Pakistan was corrupt. That wrong impression will now change.

It is time to ban the PPP for the murderous anarchy and wholesale mass-looting of the nation it perpetrated. Enough is enough.

GREAT. BUT WHAT ABOUT CORRUPTION IN PML-N, IMRAN KHAN GANG AND AMONG THOSE IN UNIFORM, BABUS AND JUDICIARY? SHOULD NOT ARMY TO COME CLEAN TO HAVE ANY CREDIBILITY?