Home Features The Crisis of Kunduz

The Crisis of Kunduz 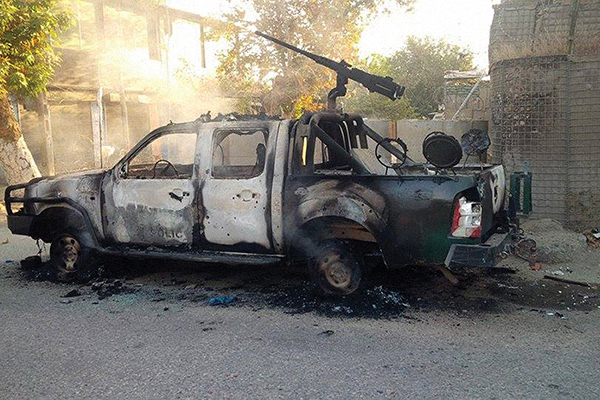 There’s an ill wind blowing to Pakistan from the Taliban takeover of Kunduz.

In a mental state of war, you fight without going into the field; you’re transformed into a cannon-without-ammunition, a smoke bomb, a popgun. All your actions and words are transformed into slogans and battle cries. It’s a state of hatred of self and of others; it’s the highest degree of lie. —Ali Salem, playwright

Most analysts of the Urdu press in Pakistan responded to the Taliban capture on Sept. 28 of Kunduz, Afghanistan’s northernmost city, with such a lie. (The Afghan National Army retook Kunduz on Oct. 1.)

They welcomed the war cry of the newly ascendant holy warriors against President Ashraf Ghani’s government, which they see as inextricably allied with hated India. The talking heads saw the takeover of Kunduz not as the latest crisis on Pakistan’s western border but as a sign that India and its Afghan “agents” would now be in for a drubbing.

As the Taliban looked like returning to power after 14 years in the wilderness, Pakistani commentators speculated about what their return would mean for India, ignoring, at our peril, what it might actually mean for Pakistan.

Focused on what the fall of Kunduz represented for India, former Pakistan Army chief Aslam Beg and a clutch of retired military officers went into their familiar crouch. The Taliban remain the only real power in Afghanistan, said Beg, and this time they will not succumb to the conspiracy of infighting: “America should realize that it can’t achieve its objectives through money and military might. This time, after having burned its fingers in Iraq, it doesn’t have the capacity to fight the Taliban.” Beg’s message to his countrymen was this: Don’t subjugate your thinking to that of America’s. He predicted Pakistan would recognize the Taliban government as soon as it could be established in Kabul.

Ex-Air Force officer Shahid Latif also swooped down on India. He said the Ghani government the U.S. had left behind in Kabul was finally exposed for being clueless, and he welcomed the joining of some sections of the Islamic State militant group with the Taliban in the latest operation because this would, to him, counter India’s RAW controlling some parts of Afghanistan in tandem with the Afghan security agency. Zahid Sheikh, a former Pakistan Army general, said Ghani had badmouthed Pakistan and would soon be punished with defeat.

But someone more important chose not to join the frog chorus. Addressing the Central and South Asia Security Conference in Munich a day after the fall of Kunduz, Pakistan’s Army chief, Gen. Raheel Sharif, weighed his words carefully: “Perpetual instability in Afghanistan has telling effects on the region. Instability within and without has deeply affected the socioeconomic climate in Pakistan, and a peaceful Afghanistan could open regional connectivity. The China-Pakistan Economic Corridor’s benefits can be shared. It is essential also for the socioeconomic development of Pakistan to address the menace of extremism.”

Meanwhile, in New York, Pakistan’s foreign secretary, Aizaz Ahmed Chaudhry, was also mercifully correct in dispelling doubts about safe havens in Pakistan from where the Afghan Taliban were supposed to have attacked Kunduz, and said Pakistan would not recognize any illegal move against the Kabul government: “Afghanistan is being run by a democratically elected and legitimate government and occupation of its territory by any group is unacceptable.”

Either most Pakistani pundits read the signs wrong or they simply decided to create hype because that is what they thought the powers that be in Pakistan would like to see. They underlined the message by roundly condemning the Pakistani prime minister, Nawaz Sharif, for what they thought was an unthinking gesture of national surrender: Sharif’s waving to his Indian counterpart, Narendra Modi, during a meeting at the U.N. (Modi reciprocated the gesture enthusiastically.) That transformed everyone into a cannon-without-ammo. Should Sharif have pumped a fist at Modi instead?

Pakistan, it appeared, was in a posture of readiness after the Kunduz fall. Is it preparing to take up the narrative from where it was interrupted in 2001 by the U.S.-led and U.N.-sanctioned destruction of the Taliban government of Mullah Omar?

Kunduz had been encircled by the Taliban for several months, belying comment in Pakistan that it was too far in the north to be within reach of the mostly southeast-based Taliban. On the contrary, Kunduz, which is near the border with Tajikistan, was always a Taliban stronghold, giving battle to the Americans when they finally arrived in the city. (Pakistan evacuated a lot of its warriors and “officials” from the city on an emergency basis after 9/11.)

Recently, the Afghan Taliban targeted by Pakistan’s Operation Zarb-e-Azb in North Waziristan also gravitated northward to Kunduz instead of southward to Kandahar. Unless the Taliban are kept at bay by the Afghan National Army with help from leftover U.S. Special Forces, the “victory” in Kunduz will cause changed loyalties in Afghanistan instead of bringing the various anti-Taliban militias together. If the world gives up on Afghanistan—which is what is happening— Kabul may be attacked with a north-south Taliban pincer.

The buzz in Islamabad was that a defecting Northern Alliance warlord in Kunduz had facilitated the Taliban takeover, recalling how another Northern Alliance general in Mazar-e-Sharif had surrendered the city to the Taliban in 1997. On the Afghan side, a similar linkage was made between the Taliban and Pakistan. The new Afghan Taliban leader, Mullah Mansoor, reportedly sent the following message to the people of the fallen city: “The Afghan government should stop blaming its defeats on outside intelligence agencies.” Needless to say, the world is supposed to read this as a message from Pakistan.

The battlefield in Afghanistan is more complex than Pakistan may think. The media says that a U.N. report has claimed I.S. activity in 25 of Afghanistan’s 34 provinces. Recently, 300 I.S. militants had attacked several government checkpoints in Nangarhar province. The revival of the Taliban in Afghanistan will also mean the revival of Al Qaeda after its eclipse in 2011, when Osama bin Laden was killed in Abbottabad.

What will it all mean for Pakistan? Is a victory of the Taliban an indirect victory for Pakistan and a defeat for India? In 1992, as the warlord controlling Kabul as its “defense minister,” Ahmad Shah Massoud burned down the Pakistan Embassy; in 1995, after the Taliban took Kabul, it was time for the Indian Embassy to evacuate its ambassador to New Delhi. If the Kunduz attack is a Pakistan-India war redux, who will win this time around?

In 1995, Pakistan had recognized the Taliban government in Kabul together with Saudi Arabia and the United Arab Emirates. But events unfolded against this move, and the Saudi policy had to change because of bin Laden’s growing estrangement from the House of Saud. If Pakistan goes into the latest battle to “defeat” India once again, will the Saudis also go in to “defeat” Iran, which it sees making mischief in its backyard-state of Yemen? Will Pakistan follow the same playbook or weigh its options differently this time in light of the damage it suffered from the transformative fallout on Pakistan of Taliban rule?

After a period of chaos, the emergence of the Taliban government in the mid-1990s looked like utopia to Pakistanis, promised in Divine tradition to both military men and civilians alike. Many Pakistani military trainers, supported financially by a broad Western coalition and Saudi Arabia, had taught the Afghans and international warriors how to fight the Soviets. For the Pakistani common man, the Taliban were the holy administrators who had controlled crime in Afghanistan with Islamic punishments shunned by Pakistan because of their brutality. Some influential but pious Pakistanis toured Afghanistan after sprouting beards declared compulsory by the Taliban and returned bearing tidings of the ideal Home of Islam promised by tradition.

American and Saudi money facilitated the onrush of piety that spread from the madrassahs in the countryside to the big cities. Scientists in the nuclear establishment grew flowing facial hair and went to Afghanistan to meet bin Laden as the new Redeemer of Islam. The Talibanization of Pakistan resulted from the religious “soft power” projected by a small neighbor, endangering Pakistan after 9/11.

The Taliban utopia was shortlived and came to an end in 2001; much of its modus operandi is now embraced by I.S. in Syria. Change of policy in Islamabad in favor of the “American invasion” sowed factions in all state institutions and empowered the madrassahs teaching more jihad than the Quran. The seminaries were linked to Al Qaeda that funded its pious warriors as, what the world was to call, the “nonstate actors” of Pakistan. Pakistan surrendered internal sovereignty and became a weak state by informally sharing power with them.

Pakistan took long in thinking about safeguarding its internal sovereignty for many years after 2001. What became obvious was the state’s diminishing writ in most of Pakistan, proliferation of weapons among the people at large, and an obfuscation of crime as piety. Suicide bombers, meant to kill the infidel, instead killed tens of thousands of Muslims in Pakistan, including a former prime minister. Pakistan lost three important cities to terrorism: Karachi, Peshawar, Quetta. If Lahore was safe, districts south of Lahore emerged as the biggest incubators of Islamist terror, which spread to Sindh and dominated the countryside of interior Sindh.

Operation Zarb-e-Azb was still ongoing as the “good tiding” of the resurgence of the old utopia in Afghanistan started resounding on Pakistani TV channels. Is it time for the madrassahs to stop cowering and regain their old posture of public arbiters? This re-empowerment, if it comes, will seriously hamper the efforts being made by the state to snatch its power back from its homegrown jihadists.

If the Taliban regain and hold on to Kunduz, and other Afghan cities and provinces also fall like nine-pins, Pakistan will experience institutional convulsions not seen since the first Taliban rule. The victory of the Taliban, when it comes, will once again see Pakistan becoming a conveyor belt for the produce of the Afghan poppy fields and a cash cow for the war chest of jihad through kidnappings-for-ransom and bank robberies. Pakistan will start looking more and more like Afghanistan, lying to itself into thinking it is making a sacrifice—to teach India a lesson.

i think whoever wrote this article was trying ,partly successfully ,to portray Pakistan as the one responsible for all the mess in Afghanistan. Writers biased against Pakistan are paid very well by their masters!,

Where is the bias in this article, please explain.It is just the flashback of the Taliban story being replayed before our eyes. Only pray to God that there is no rerun of the First Version of 1995 Talibani Rule.Search of Strategic Depth carries a very stiff cost, please weigh your option before it is too late.