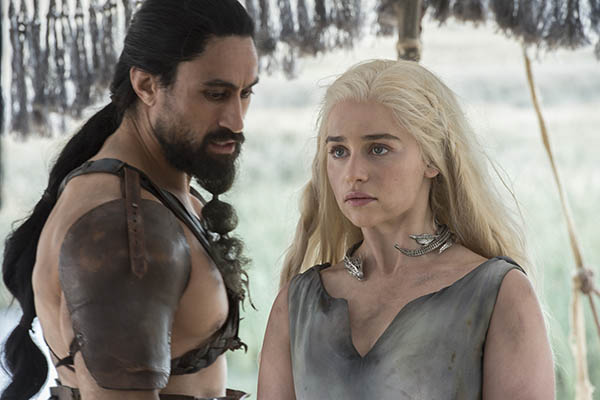 Season six of the hit show premieres this week—overtaking the book series it is based on.

From Jon Snow’s vital signs to festering grudges over wedding dust-ups, hit HBO show Game of Thrones ended season five with more cliffhangers than a rock climbing convention. With so many loose ends needing urgent attention, viewers can only be sure of one thing: winter is coming, and it’s going to be tense, bloody and probably semi-nude.

Here are the big questions as season six opens on Sunday.

So is Jon Snow dead? Well, yes, if you understand how physics, biology, credible narrative and stabbing people repeatedly normally works. If the young hero were joining the Night’s Watch all over again it seems unlikely he’d pass the medical, what with all those knives sticking out of him.

Last season ended with the boy in black on the slab, spilling more claret than a drunken wine waiter, and with a face that said: “I think I’m going to sit this season out.”

Then there’s the small matter of his corpse—his very, very dead corpse—appearing all over the place in the season six teaser spots. Wishful thinkers point to sightings of the actor Kit Harington in Belfast while the new season was being shot there, but the rest of us expect to see the Jon Snow action figure in thrift stores any day now.

Showrunner David Benioff could not really have been more clear when he said in a recent interview: “Yeah, Jon Snow is dead.”

Another character very much up against it as the curtain went down on season five was flaxen-haired throne-fancier Daenerys Targaryen, played by the distinctly raven-haired Emilia Clarke.

Smarting from insurrection in Meereen, she and her confusingly named dragon, Drogon, found themselves stranded on the Great Steppe and surrounded by Dothraki warriors who didn’t look like they were hunting autographs.

She was once their queen, but will the nomadic Dothraki take the Mother of Dragons prisoner? And will she manage to use that winning smile to talk her way out of her predicament? And did anyone see where she parked that dragon?

If you thought Dany was having a bad day, Cersei Lannister’s cunning plan to unleash a religious zealot called the High Sparrow appears to have backfired spectacularly after he had her arrested. Paraded naked through the streets, she is now relying on King’s Landing’s famed sense of justice and fair play as she goes on trial for treason, incest and regicide. Good luck with that then.

Adding to her woes, Jaime, Cersei’s brother—and lover—bears news of their daughter Myrcella’s murder. And all the while Cersei’s undead bodyguard Gregor “The Mountain” Clegane is running amok.

It’s a volatile situation that’s going to require some serious diplomacy, and since things don’t go down that way in Westeros, expect to see tears before bedtime. And blood.

Winterfell’s ailing noble Bran—paralyzed from the waist down after being pushed out of a window by Jaime Lannister in season one—traveled beyond the Wall to find a sorcerer he’d seen in his visions.

Bran Stark’s new mentor the Three-Eyed Raven, played by the delightful Max Von Sydow, is allied to the ancient Children of the Forest against the nasty White Walkers. But we haven’t had so much as a postcard since the group reached the Raven’s weirwood throne. Actor Isaac Hempstead Wright, who plays Bran, skipped season five altogether.

What will the young Stark and his companions have to sacrifice to aid the sorcerous mystic?

Walder Frey and Roose Bolton really seemed to get away with betraying the Starks, with the Red Wedding massacre fading into memory. Or did they? Sansa, Arya and their surviving brothers must surely have a bone to pick with the duo, if not dozens of bones, two nervous systems and several pounds of flesh, along with every other northern house, which saw its nobles cut down.

They say revenge is a dish best served cold, but judging by the teaser footage, the North could be about to lose its cool.