Home Scope The Man Who Sparked the Moenjodaro Controversy

The Man Who Sparked the Moenjodaro Controversy 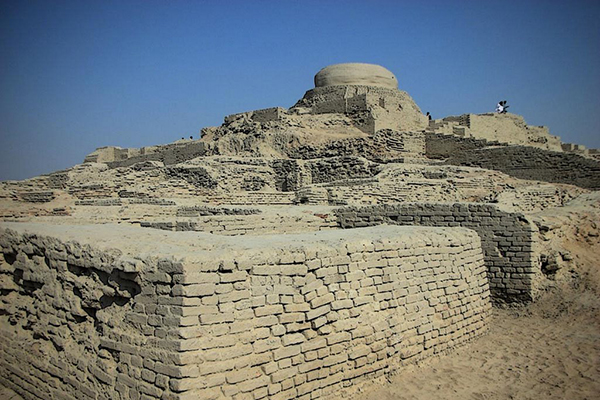 Meet the man who almost ruined the party.

Amar Guriro, an environmental activist and journalist, was the first to sound the alarm about the potentially ruinous impact of the Sindh Festival’s Feb. 1 opening ceremony on the UNESCO World Heritage site of Moenjodaro. His photos of the preparation work for the function blew up on social media, inspiring online petitions and scathing criticism of the Sindh government’s alleged disregard for heritage and conservation norms. We spoke with Guriro recently about the controversy. Excerpts:

You were the first to report on the opening ceremony’s potentially damaging impact on the ancient ruins. Did you expect your tweets to elicit such an overwhelming public response?
Listen, I was just as excited about the festival as anyone else. It is a great initiative. I decided to visit the ruins after the festival was announced. What I witnessed there was disheartening. I brought back videos and pictures and filed a story for the publication I work for, but they refused to run it. So I sent out emails to NGOs. That didn’t garner any response. Finally, I sat down one night and tweeted. The response was overwhelming. A petition was put together calling on UNESCO to take notice. And then, quietly, the [Sindh Festival] organizing committee relocated the stage; they moved it about 20 feet away from the original location. Earlier, it was being constructed right under the stupa mound—I have evidence of this—and the initial scaffoldings were right on top of the archeological site.

But then it goes to their credit, and yours, that the organizers repositioned the stage.
Parts of the platform were still barely three inches from the ruins yet [they were] proudly exclaiming that at least it isn’t touching the ancient walls. That makes no sense. Other areas of the stage were hovering two feet above the walls—you can see this in the video they recently released. My advice to them was to stop justifying all this and just move the stage, at least a kilometer away. They would still get Moenjodaro as the backdrop without threatening any damage to the site. The only one backing their claims was the director of the Sindh archeology department who, I might add, is an employee of the Sindh government. This is a heritage site that belongs not just to Pakistan and Sindh, but to the entire world. There are rules that govern these sorts of things. You cannot hammer a single nail into the ruins. Take Jinnah’s mausoleum. Everyone holds political rallies there but the rules require that such gatherings happen at least a kilometer away, and this rule is observed. The mausoleum is, of course, much sturdier than the millennia-old Moenjodaro ruins.

In your opinion, did the opening ceremony violate any Pakistani laws?
After the 18th Amendment, responsibility for preservation, conservation, and tourism was transferred to the provinces. In this case, it is not the provincial government that envisioned or put this festival into motion. The show is being solely led by Bilawal Bhutto Zardari. What office does he hold? That itself is a violation. We will only be able to assess the true damage after the event. Massive speakers were installed at Moenjodaro for the musical concert. Can you imagine what effect the vibrations would have had on the ancient site already in decay?

Has anyone from the Sindh government or Sindh Festival contacted you?
I received a few phone calls, mostly from the PPP. They told me that I have created a lot of problems for them and that they were forced to release a video and a string of statements to counter my arguments. Moenjodaro is not my personal property; my concerns have been echoed by others. [The PPP] did offer to take me to the site so I could reassess my statements. I didn’t go, even though I was under immense pressure.

What needs to be done to protect Moenjodaro?
The last government, which was also PPP-led, did raise awareness about the ruins and their decaying state. Sassi Palijo, the culture minister at the time, amassed funds for the restoration of Moenjodaro. Pakistan got the money, but apart from some superficial cleaning, no one knows what came of the funds.

Shameful. How do we sign the petition? can newsweek put it up online

Hats off to Aamir

Why hasn’t the UNESCO taken notice. probably because the damage isnt so bad.. if it is aworld heritage site than UNESCO would have done something about it been damanged.

Amar himself acknowledges that after he pointed out certain mistakes, they were rectified. He then refuses to go and see first hand, the changes made as recommended by him. So as far as I’m concerned the problem was dealt with and a fantastic show was put on! Where’s the problem!

If you read the interview CAREFULLY, it says parts of the platform are still three inches away from the walls. that is a violation of UNESCO laws. you cannot even hammer a nail within 20 km of a world heritage site.

When Rome was burning, Neru was playing flute. Today Sindh is burning n our young Neru is dancing on the ruins! PPP has made Sindh Moen Jo Daro!! What a great good, they have done!!! They have every right to celebrate with a cunning n cruel smile,”Look! We have ruined Sindh, we have turned whole Sindh in Living Moen Jo Daro, the mound of dead!” LONG LIVE OUR NERU KINGS N KIDS!

where from he brought the pix as he didn”t visit the site infact? He was used by anti PPP elements.

The voice and heavy lights were demaging the ruins and kissing the dancer at stage was against the Sindhi spirit of Laj (chastity).