The Misery of Pakistan’s ‘Slaves’ 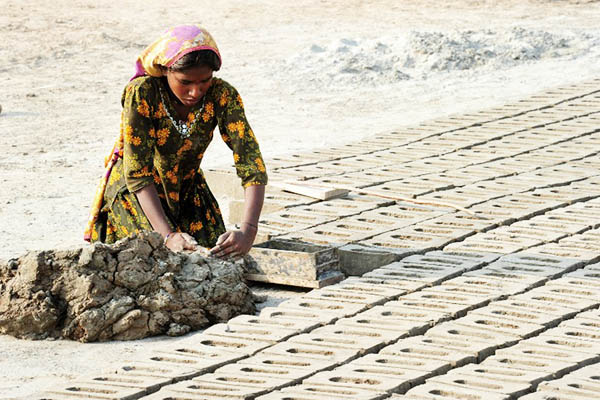 Bonded laborers in rural areas continue to be exploited by their ‘owners,’ in spite of laws assuring them protection and freedom.

Ranjhan has spent 40 years working in a brick kiln as a bonded laborer, tied to his employer by a debt his pitiful salary will never enable him to repay. He is one of more than two million Pakistanis that campaigners say are trapped in “modern-day slavery,” condemned to a lifetime of hardship and toil.

There are laws in place to outlaw bonded labor, but still the cycle continues, with thousands of children sucked in every year by their parents’ supposed debts.

At an open-air factory on the edge of Hyderabad, tall, tapering chimneys belch out noxious smoke. Crouching children gather lumps of clay and pack them into rectangular molds. On the ground, long rows of unbaked bricks wait to go into the kiln.

These are the scenes that have been the backdrop to Ranjhan’s life since he was a child. “I’ve spent the last 40-odd years in this grind, sometimes in one factory, sometimes in another,” he said. He works every day of the week at the coal-fired kiln, where 1,000 bricks will earn him around $2, every cent of which goes straight back to his employer. “I borrowed Rs. 40,000-50,000 to buy food for my children. I will never pay it back before I die—my debt will die with me,” said the father-of-three, away from the eyes of his boss.

A global survey of slavery published last month by the Australian campaign group the Walk Free Foundation said Pakistan had the third highest number of “slaves” in the world, after India and China, most of them working in brick making or agriculture. Walk Free says the government needs to act to tackle the problem, including by regulating brick kilns and enforcing anti-slavery laws.

About the origin of his debt and that of his parents before him, Ranjhan says little. From buying food to wedding dowries to hospital visits—there is no shortage of reasons why these impoverished workers would go to their boss for a loan, which they can then never pay back.

Once the debt begins, the employer too has no shortage of reasons to keep adding to it—exorbitant charges for accommodation and food are typical—so the worker has no chance of ever paying it off. “Everything we earn goes to our creditor who gives us food to eat,” said Ranjhan.

Brick factories and farms across the country run on these workers, who are fed for a pittance on bread, lentils, oil, sugar and onions. Some small trade unions are trying improve the situation, lobbying bosses to raise salaries to the equivalent of $5 dollars a day and not to trap their workers in the debt cycle.

“Before the union, the workers here didn’t even have names, just numbers. If someone came and asked them their name, they’d say ‘Ask the boss, he’ll tell you’,” said Puno Bheel, who set up a brickworkers’ union in Hyderabad a few years ago. But despite their best efforts the unions are fighting a difficult battle. A few employers may have improved wages and conditions, but the unions have not persuaded any to free bonded laborers.

But some, like Sajan Kumar, have been able to escape. Five years ago the owner of a rice and pepper farm where he had worked for years with his family demanded $4,500, claiming their work had not covered the cost of feeding them.

Kumar’s uncle went to the Green Rural Development Organization, a campaign group, which took the matter to court. The owner and his men threw Kumar and his family in vehicles and drove them into the desert “chained like animals,” Kumar says. After days being held in the desert, the 87 members of Kumar’s extended family, all from the Hindu minority, were recovered by the police.

“It was slavery, what else would you call it? We were treated like animals, we worked day and night,” said Kumar. Once freed, the family pursued the matter further, accusing the landowner of illegal detention, an unusually audacious move in a country where the rich and powerful rule virtually unchallenged in rural areas.

Kumar and his family got more than $20,000 in an out-of-court settlement—a rare victory despite a law banning bonded labor being on the statute books since the early 1990s. He now lives in the village of Azad Nagar, near Hyderabad, which is populated by former bonded laborers.

The family bought a minibus and Kumar opened a grocery, but those leaving the practice face a difficult and uncertain future.

The life and economy of rural Pakistan is usually dominated by powerful local landowners, who own the farms and factories that employ people and have enormous influence over local authorities and police.

Ghulam Haider, the head of the Green Rural Development Organization who set up Azad Nagar in 2006, said they had managed to free 28,000 people, but around half of them have ended up back in bonded labor for want of any other work.

For little Jenny, her hands worn from work at just 12 years old, the future looks bleak. She has already spent years feeding animals, working in the fields, cleaning houses and pumping water for a landowner. “We only got to eat at the end of the day and they beat my brothers. We would say to them, ‘Why are you so cruel to us?’ and they would reply ‘Pay me!’,” she says. Jenny and her family have been taken on by another boss now, but privately her father says little has changed.