How many more will molt into Mohammad Sikandar?

On Aug. 15, the same day that interior minister Chaudhry Nisar Ali Khan presented his government’s national-security policy to Parliament, 51-year-old Mohammad Sikandar drove his wife and two children to Islamabad for an hours-long, made-for-TV showdown with police in the middle of the road that leads to Parliament. 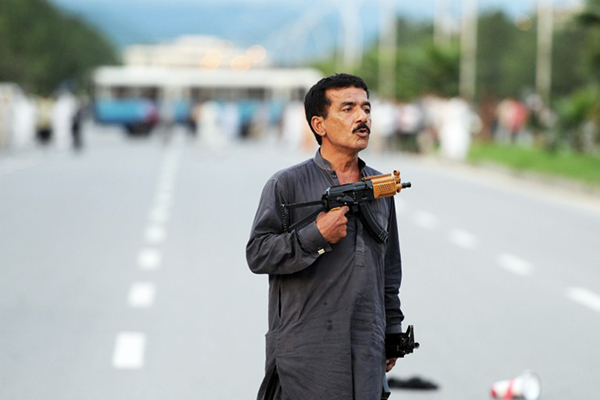 Sikandar, the son of a land-records functionary in Hafizabad, Punjab, was armed with a Kalashnikov and a submachine gun. He made his demands—forwarded on a piece of paper by his wife, who was not opposed to what he was doing—known to a police officer. Sikandar called for disbanding the elected government currently in power and for imposing a truly Islamic system on Pakistan. If his demands could not be met, Sikandar said he wished to be killed and buried at sea—like Osama bin Laden.

Semiliterate Sikandar mouthed the myths created by the state of Pakistan back at it. He aped the terrorists at the unconscious level, adopting their appeals to the broken pledges of the ideological state, and clearly embraced the rhetoric of religious parties who accept the status quo with strong, clearly expressed reservations of the “incomplete state.” He also resorted to the line adopted by Al Qaeda after its top leader’s death—and supported by Pakistan—that bin Laden’s murder was wrong. He added to it the universally accepted “truism” in the country that the state of Pakistan is a “slave” of America.

His father-in-law told the media that Sikandar was mentally disturbed—“had psychological problems”—but was not linked to any religious organization. This could be said about most Pakistanis because the collective mind has been molded by the state to justify its stance until it looks abnormal to any objective observer. (An objective observer has to be either a foreigner or a Pakistani who has “sold himself to foreign powers.”)

It is very difficult for such an observer to separate “religious organizations” from terrorism. There are two shades of meaning to set apart here. There are the religious organizations (like Jamaat-e-Islami, Jamiat Ulema-e-Islam, etc.) who are “legal” and take part in elections but who nonetheless reserve their judgment about the validity of Pakistan as an Islamic state. Sikandar could be repeating what he heard from their platform about the “slavish” foreign policy of Pakistan and an “incomplete” Islamic state where usury is the foundation of the national economy. Usury is banned by the Quran and the Supreme Court.

Then there are the “religious organizations” that are banned as terrorist organizations under international pressure but who have served in the past as instruments of the Pakistan Army’s cross-border “asymmetrical war” (like Jaish-e-Muhammad, Harkat-ul-Mujahideen, etc.) who survive because the state might need them again. Jaish has been known to have links inside the military—as in the case of Air Force officer Adnan Rasheed who has turned terrorist—but now count themselves among the allies of Al Qaeda.

Then there is the case of “semi-banned” religious organizations—semi-banned because the label of terrorism given to them at the international level has been stripped by the judiciary at the level of the High Court or Supreme Court. This category contains Sipah-e-Sahaba and Lashkar-e-Taiba. The first has renamed itself Ahle Sunnat wal Jamaat and the latter as Jamat-ud-Dawah. Both are members of the Defense of Pakistan Council, which opposes Pakistan’s efforts at normalization of relations with India, a stance it is perceived to share with the Pakistan Army, as manifested in the ill-conceived military policy of fielding their retired officers in TV discussions where they oppose the normalization trend.

All these banned and semi-banned organizations are allied to international terrorism through an avowed or un-avowed connection with global terrorism. They derive their strength from the fact that their ideology is the same as the ideology of Pakistan; only their version of it is considered by their followers as more “pure” than the functional state of Pakistan. Their appeal is strong because they don’t want Islam removed from public life—as the last surviving secularists do—they want it “completed” through the enforcement of such cardinal acts of faith as extirpation of modern banking, imposition of compulsory collective prayer, and observance of jihad. They regard democracy as a Western imposition and recommend the erection of khilafat.

Pakistan has shot itself in the foot by espousing the cause of international terrorism on a number of issues. It believes America is not a friend but an enemy aligned with India and Israel, bent on weakening and destroying Pakistan by stripping it of its nuclear weapons. Pakistan has allowed the media trend of “America hatred”—which invariably turns out to be hatred of the West and its values—until 80 percent of Pakistanis say they view America with hostility. After having thus brainwashed the public mind the state now follows the public mind no matter where it may take it, as in the case of Lal Masjid and Aafia Siddiqui.

A newspaper today makes an elaborate case claiming that Sikandar may have been influenced by the CIA, Mossad, and RAW while employed in Dubai.

It was therefore only logical that Sikandar, who followed the line inculcated by the state, was suddenly treated to another line also laid down by the state and its functionaries: that Sikandar was in fact an American operative sent from Dubai.

A newspaper today makes an elaborate case saying that Dubai, from where Sikandar had returned to Pakistan after lengthy employment, is crawling with CIA, Mossad, and RAW operatives who could have influenced Sikandar. (It does not say why the three secret agencies would plan the kind of meaningless standoff in Islamabad that Sikandar ended up staging. It however speculated that he could have been planning to attack Parliament.) The paper refers to the death in a Dubai hotel room of a Palestinian at the hands of Mossad in January 2010. It also refers to the death in Lahore of Khalid Bashir, a companion of Jamat-ud-Dawah chief Hafiz Saeed. Bashir was killed by someone within Taiba ranks, but Saeed said the killer had been sent by India. Supporting Saeed’s claim, the paper adds that some link to Dubai too was traced in Bashir’s murder. Thus it “proves” in a preliminary way that Sikandar also may have fallen prey to an Indian intrigue to cause disturbance in Islamabad.

The India-through-Dubai link has been inspired by the current atmosphere of warlike confrontation with India, caused by what India alleged was an incursion of Pakistani elements across the Line of Control in Kashmir that killed five Indian troops earlier this month. Add to this tension the more-than-normal monsoon rainfall in the country causing floods—which the media has also blamed on India. Once again the Pakistani mind, shaped by the state, was challenging the state: reply to India’s “water war”!

Under the Indus Waters Treaty of 1960, River Chenab belongs to Pakistan and India can’t dam its water during its passage through India. The media accused—and the government did not challenge the accusation—that India had opened the floodgates of the Chenab on an already flooded Pakistan. It did not say which dam in India on Chenab waters had been used to flood Pakistan because so far all the Indian dams challenged internationally by Pakistan have been found not to be storing the kind of water that can flood Pakistan. India cannot build that kind of a dam on the Chenab.

Hafiz Saeed took no time to challenge India once again. On Aug. 15, newspapers published his latest dare to India while the government was taking a moderate line, accusing India of “water aggression” against Pakistan. With millions of American dollars riding on him as head-money, arguably the most powerful man in Pakistan was simply consolidating the mind the state has nurtured against itself.

Under stress, many more Pakistanis may act like Sikandar. The social-media reaction features many who take his side and think like him.

Khaled ahmed, don’t act naive. After Raymond davis was caught with pictures of Pakistan’s nuclear sites and other sensitive information in 2011, it was exposed that there are many CIA and blackwater operatives in Pakistan who are not only spying for Pakistan’s nuclear assets but also funding and training terrorists in Pakistan. that is why general pasha told blackwater to leave. americans have never been sincere with Pakistan which can be evidenced from the fact that americans have never invested and helped Pakistan with a real infrastructure project such as steel mills, dams, etc. it has always been china, Russia, japan, or some muslim country. so much for American sincerity with Pakistan!

Nothing more than a distraction. In Karachi, he wouldn’t have lasted 5 minutes.

A just and intellectually honest analysis of the Sikandar dama by Khaled Sahab. Over 90% of the people in this country are half-backed and ill educated. The truly educated people are less than 10% despite the fact that literacy rate being reported is above 45%. The said 90% are always ready for a final combat with India and even with America and the irony is that they are confident that they can beat the two.