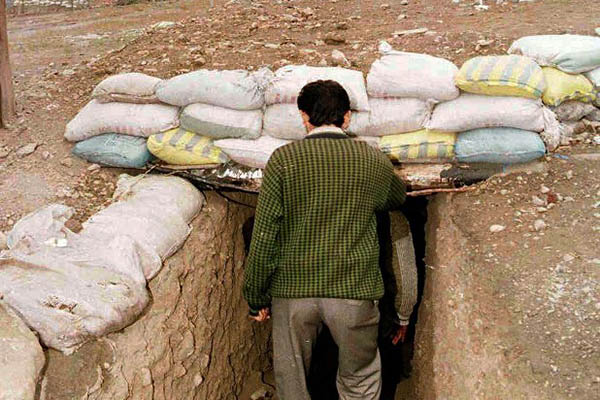 A resident of Kargil enters a bunker for protection during the 1999 conflict between Pakistan and India. Mustafa Tauseef—AFP

Textbooks dealing with national politics are supposed to be collections of prescribed knowledge, which don’t necessarily tell the truth if it goes against the accepted “national narrative.” National myths are made permanent in the textbook; and if you deviate as a student-examinee from its “truths” you can actually fail exams. In this way, textbooks tend to become falsification of facts when it comes to the ideology of the state and its “action” in pursuit of its ideology and policy.

Pakistan has a “foreign policy” textbook—Pakistan’s Foreign Policy: a Reappraisal—written by former ambassador Shahid Amin. It was initially printed in 2000, reprinted in 2010, and then reprinted once more in 2020. It is currently being read by students who wish to take civil service exams. Amin served in the Pakistan Foreign Service in various capacities, including as ambassador and special envoy. He was Pakistan’s ambassador to Saudi Arabia, France, the Soviet Union, Nigeria, and Libya, with concurrent accreditation to several other countries. He was also posted in New Delhi, Kabul, Tehran, Brussels, London, and New York.

Amin retired from the Foreign Service in 1997. He is a well-known figure in the media, where he often participates in discussions on international affairs and Pakistan’s political and economic scenario. The author has also published articles on foreign affairs in local and international publications. His other publications include Realism in Politics (2003); Coexistence or Conflict? (2012); Concise History of Pakistan (2015); Pakistan Forever (2017); and Pakistan’s Relations with Saudi Arabia (forthcoming 2020).

The May 1999 Kargil “crisis,” known to “outsiders” as Pakistan’s defeat at the hands of India, has been assigned a chapter in Pakistan’s Foreign Policy: A Reappraisal. The author sums up the most humiliating event in Pakistan’s history like this:

“A closer examination of the apparent Indian successes suggests a less rosy picture for New Delhi. In the battlefield, India did poorly. According to India’s own estimates, the number of the intruders was in several hundreds. They did not possess the weaponry of a regular army action, only a guerrilla force. To throw out this small number of intruders, India threw in a force, at least, of over 20,000 (some accounts suggest twice this number) regular troops including some elite commandos, backed up by heavy artillery and the latest aircraft, the Indians made painfully slow progress. Two months later, India had only made limited military gains on the ground.”

He continues: “The eviction of the mujahideen was eventually secured through a political decision. In the process, the Indians bore heavy losses: the official count was nearly 400 dead, which was high enough against the small number of “the mujahideen.” The Indian casualties were believed to have been higher despite enjoying overwhelming military superiority, and making allowance for the fact that the Indians had to climb up the hills, the Indian military performance was poor, whereas the mujahideen seem to have fought like tigers. This clearly raises questions about the quality of the Indian military and its morale, despite all the hype generated by the Indian media.

“India paid a heavy financial price for its military campaign, probably running into billions rather than millions. It lost at least two aircraft and one helicopter. The reported cost of firing one shell of a Bofors gun, in use of the Indian army, is about Rs. 40,000, whereas thousands of such shells were fired. It also seems likely that, henceforth, India would be obliged to keep a large force on the Kargil heights to defend them, even during the severe winters when temperatures come down to -40 degrees. This would entail substantial financial expenditure as well, apart from the physical hardship including frostbite and frozen death for the soldiers guarding these desolate military ‘gains’ for India of the recent Kargil crisis might well turn out to be a Pyrrhic victory.”

Writing further, Amin’s account explains how the Kargil battle was a victory for Pakistan—despite its own Army not even being involved. It rebuts the Indian version, which the world was then more inclined to credit. “For political reasons, the Indian government chose to play up the funerals of dead soldiers in the Kargil fighting. This could turn out to be a grave mistake. So far the Indian public had by and large little of the body losses in the Kashmiri insurrection since 1990. The parallels of Afghanistan or Vietnam did not quite seem applicable to Kashmir. India was taking casualties but there were no known protests from the Indian because there was no highlighting of the casualties. But, the situation has changed with the public effusive mourning of the returning dead. For a while, no doubt, the war fever kept the morale high. However, history bears witness that this euphoria rarely lasts. The growing awareness of physical and financial losses would, sooner or later, probably tell.”

It is interesting to juxtapose the non-Pakistani view of the battle with Pakistan’s textbook version. The non-Pakistani version was presented by a group of scholars in “Limited Conflicts under the nuclear umbrella and Pakistan’s Lessons from the Kargil Crisis” (RAND 2020):

“In the spring of 1999 the world discovered that Pakistan had made a foray into the Kargil-Dras sector of the Line of Control with India pursuing the not so clear objective of a limited war. The RAND authors guess at the objectives: ‘a desire to redeem itself after its humiliating defeat in the 1971 war with India: Indian occupation of the Siachen Glacier; a desire to punish India for its periodic shelling of the Neelam Valley road and its other ‘provocations’ along the Line of Control in Kashmir; a desire to energize what at that point appeared to be a flagging insurgency in the Kashmir Valley; and, finally, a desire to exploit its newly confirmed nuclear capabilities to achieve those lasting political changes in Kashmir that had hitherto eluded Islamabad.”

According to the authors, “Pakistan has realized that Kargil-like operations are not legitimate in the current international environment but it still thinks that Low Intensity Conflict can be used to attain political objectives. Yet Kargil was yet another example of Pakistan’s (lack of) grand strategy as it repeated the 1965 and 1971 war scenarios not supported by the international community. Kargil was unprecedented in the history of Indo-Pakistan ‘violent peace’ in Kashmir in terms of its rapidity and the degree of India’s counter-response.

“It aroused the world to the possibility of escalation of conventional war into a nuclear one in South Asia. The study concludes that Kargil confirmed for India Pakistan’s identity as a reckless, adventuristic, ‘risk-acceptant’, untrustworthy state, spearheaded by a military that controlled the state. It blunted India’s inclination to resolve the Kashmir issue with Pakistan as a party to the dispute. It also persuaded India to diversify its old strategy of not allowing any extra-regional inputs into the resolution of its disputes with Pakistan. It woke up to favorable international attention on the Indo-Pak disputes.

“The press in Pakistan reacted favorably to the Kargil Operation, but as the news of the involvement of Pakistan Army in the Operation reached it, there was a realization that Pakistan would have to pay heavily for the army’s adventurism. On the other hand, the army, while realizing the negative fallout from it, thought Kargil showed the way to calibrating the covert operation in Kashmir with the help of religious parties.

“The press also belatedly realized that the government of Nawaz Sharif did not get the expected support on Kargil from China despite visits by foreign minister Sartaj Aziz and the prime minister himself. The army was forced to deploy a rhetoric of peace with India, offering ceasefires and even much less credible partial withdrawals of troops from the border. Pakistan’s readiness to risk escalation to nuclear levels could actually be a ‘nuclear signaling’ when it felt that Indian troops deployment was going beyond the tolerable threshold.

Into the pit of isolation

“Pakistan was disenchanted by the international reaction that Kargil provoked. The United States, G-8, and China, by expressing their displeasure, made it obvious to India that Pakistan’s options could actually be restricted at all levels of diplomacy, and that war had thrown it into an isolation that was palpable and could begin to be felt by Pakistanis too. It was indeed the negative international reaction that forced the government in Pakistan to call off the operation at the risk of offending the army. The Kargil fiasco ended with the Pakistani army chief General Musharraf throwing out the elected prime minister Nawaz Sharif and ruling Pakistan for the next decade, an uncanny “reward” for subverting democracy in Pakistan.

“The political cost of the Kargil Operation was great, but coupled with the isolation caused by Pakistan’s covert policy in Afghanistan, it forced the author of Kargil to effect a volte face that the old establishment has not had to time to digest. General Musharraf, as a post-Kargil personality, got rid of the other two generals involved in the Operation, and purged himself by joining the international coalition against terrorism after September 11. He has been able to get the 1998 sanctions lifted from Pakistan, to get the national foreign debt rescheduled, and to get more new loans that Pakistan had despaired of attracting in its earlier isolationist mode.

“Relations with Iran and Central Asia improved and China felt relieved of the threat it perceived from the jihadis and a rapidly Talibanizing Pakistan. He may have kept a ‘compensatory’ accent on the Kashmir issue but the effect of ditching the Afghanistan nursery of religious mercenaries has made a dent on the jihad in Kashmir too. Kargil may have affected Pakistan’s policymakers more profoundly than the study is able to fathom, and may have contributed to the paradigm shift in Pakistan’s thinking about the region and the world.”

In December 2012, Lt. Gen. (retd.) Shahid Aziz went public with the “secrets” of the 1999 Kargil Operation conducted by the Pakistan Army against India, the first act of war under civilian rule that brought yet another discomfiture for Pakistanis to bear. This was revealed after he wrote a confessional book containing chapters on the “fiasco.”

“According to Aziz, Musharraf did not even share plans of the war he was going to unleash on India with his corps commanders. Only four officers, according to him, knew about it: Gen. Pervez Musharraf, chief of general staff Lt. Gen. Mohammad Aziz, Commander Force Command Northern Areas Lt. Gen. Javed Hassan and 10-Corps Rawalpindi commander Lt. Gen. Mahmud Ahmad. He revealed: ‘Even the-then director-general military operations Lt. Gen. Tauqir Zia came to know about it later.’ Aziz himself director-general of the Analysis Wing of Inter-Services Intelligence (ISI) had no clue. The Operation was not studied professionally because secrecy was paramount.”

After Kargil, elected prime minister Nawaz Sharif, who swore he had never endorsed the Kargil adventure, was dismissed; his Army chief—defeated at Kargil—ruled Pakistan for a decade.