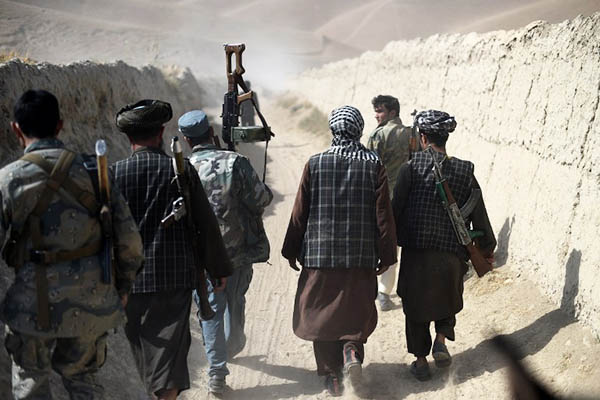 Flanked by shaggy-haired gunmen, commander Ghulam Farooq peered out from a hilltop at the biggest military prize of his storied career as a warlord—a mud-walled Afghan village captured after five years of Taliban control. The village of Qara Ghoily in the remote northwestern badlands bordering Turkmenistan offers a rare glimpse into life under Taliban rule and encapsulates governance failures that have helped the Islamists gain ground against NATO-backed Afghan forces.

When Farooq, a powerful anti-Taliban militia commander in Faryab province, wrested control of the village in August after a scorched-earth offensive, he found a population deeply disaffected with the government despite years of hardline Taliban rule. “There,” said Farooq, pointing down to a patch of clay dirt surrounded by fields of wild grapevines and deserted village roads. “The Taliban had no prison. They didn’t need one. They beheaded all their prisoners over there.”

They also kept a chokehold on social freedoms, a throwback to their 1996-2001 rule that made them international pariahs, including a ban on music, shaving of beards and hip Hollywood hairstyles. But despite their austere vision of Islam, the Taliban shored up support by restoring a modicum of order in the village through an effective shariah-inspired judicial system, filling a vacuum left by a Western-backed government seen as inept and corrupt.

Unlike the official legal system, built with millions of dollars of foreign aid, the Taliban’s informal court dispensed swift justice on all matters, from adultery to robbery. And one thing in particular set them apart from government officials: they never demanded a bribe.

“If you go to a city court, the judge will take your money, the clerk will take your clothes and the guards will take whatever is left,” remarked a village resident, requesting anonymity for fear of retribution. “People prefer to tolerate the cruelty of the Taliban than be robbed of justice and everything they own.”

The testimony highlights the anguished choices faced by a population seemingly trapped between two evils and helps explain the insurgency’s stunning rise despite a decade of costly Western intervention.

The Taliban remain largely unpopular in urban centers, but in many rural areas the puritanical movement has entrenched itself among alienated groups, competing directly with the government for public loyalty. The Taliban now control more territory than in any year since they were toppled from power in a 2001 U.S.-led invasion, with the U.N. estimating that nearly half of all districts across Afghanistan are at risk of falling.

NATO-backed Afghan security operations that claim to kill scores of militants on a daily basis are causing the “displacement of the insurgency, not its eradication,” a Western official in Kabul told AFP.

“Insurgency is like a fever,” said Sarah Chayes, author of Thieves of State: Why Corruption Threatens Global Security, which looks at how Taliban propaganda appeals to graft-weary Afghans. “Focusing only on violent insurgents might bring down the fever, but unless you treat the whole patient—by paying as much attention to improving governance—you will never durably stabilize the situation.”

Commander Farooq, 49, is part of a constellation of informal militia groups seeking to bolster Afghan forces struggling to beat back the lethal insurgency as they suffer record casualties and a growing spate of desertions. Unregulated and unaccountable, such groups are often accused of banditry and predatory behavior that in some areas has driven Afghans into the arms of the insurgents, seeking protection.

But Farooq, a Soviet-era warrior who fought alongside the legendary resistance fighter Ahmad Shah Massoud, styles himself as a formidable bulwark against the Taliban. He managed to do what government forces could not for five years—dislodge the Taliban from Qara Ghoily in an offensive that left an entire terraced hillock in the village gutted after being slammed by rockets.

The insurgents escaped on motorbikes, villagers recalled, planting landmines and booby traps in their homes and backyards as they fled.

Joining the Taliban exodus were around 60 families from the village of 2,000 people, which is hemmed between caramel-colored hills that cut through a hotbed of insurgency. Those who stayed back are distrustful of Farooq’s forces, but also fear the wrath of the Taliban if they return. Pro-government forces have a poor track record of holding territory seized from the Taliban.

“I have assured them ‘I will be with you when you harvest your grapes, when they shrivel into raisins, when you cook the sacrificial meat of Eid’,” said Farooq, sporting a luxuriant silk turban. “We are here to stay.”

Farooq gazed from the edge of the wind-swept hill, surrounded by loyalist gunmen who were amused as their handheld radio crackled with the voice of an eavesdropping Taliban fighter hurling profanities and threats. “It is hard to gain trust as the gap between the people and the government grows,” Farooq conceded, impassive to the chuckling. “That works to the Taliban’s advantage.”