The Victims of Human Trafficking 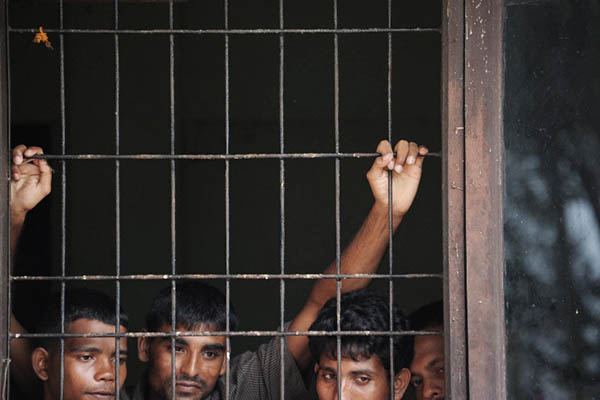 A Bangladeshi teenager who was forced onto a migrant boat recalls his horrifying ordeal.

Snatched by people traffickers in his native Bangladesh and forced onto a migrant boat, 14-year-old Absaruddin endured a weeks-long nightmare in which he almost starved to death, saw his relatives killed and was forced to jump overboard after being attacked. He lived to tell the tale after he and several hundred other Bangladeshis and Rohingya from Myanmar were plucked to safety Friday from their sinking boat and the waters by Indonesian fishermen.

“I want to go back to my home, I want to go back to my mother,” he said, speaking from a building where some of the migrants were being housed in the city of Langsa, on the northeast coast of Sumatra, after recounting an ordeal that lasted almost two months. The emaciated teenager, who comes from a poor farming family, wept as he talked on a mobile phone to his mother for the first time since he left southern Bangladesh, an AFP reporter said. His mother could be heard weeping on the other end of the line.

Those rescued from his vessel were among 900 migrants saved in one day alone in the same area, the latest harrowing episode in Southeast Asia’s migrant crisis that has been precipitated by Thailand’s move to crack down on busy people-smuggling and -trafficking routes. Huge numbers of migrants have arrived in Malaysia and Indonesia in recent days, as they are abandoned, and thousands more are thought to be stranded at sea. International pressure is building for swift action, with the United States joining calls for the region to open its ports.

Some of the grimmest tales so far have emerged from Absaruddin’s boat.

After weeks at sea, it was abandoned last week by its crew and then pushed between Malaysia and Indonesia, whose navies were unwilling to let it enter, a stark illustration of what Human Rights Watch has called deadly “human ping pong.”

As supplies ran low, fierce fighting broke out between the Bangladeshis and Rohingya, a persecuted Muslim minority in predominantly Buddhist Myanmar, with many being thrown overboard or choosing to jump. The vessel was sinking by the time fishermen spotted it and came to its aid.

Several survivors have referred to many people having drowned and been killed in the violence on board. The Rohingya and Bangladeshis, who are being housed in separate buildings in Langsa, both claim the other side started the fighting.

Absaruddin said among those believed killed were two of his relatives, his young uncle Mainuddin and another relative, Nobi Hossain, who were also kidnapped. After a starving Mainuddin, 16, begged for more food, the crew instead started beating him, and then started on Hossain, 18, when he tried to intervene. They then threw them into the sea.

“I heard them saying ‘Please save us’. We could not do anything,” Absaruddin said. “I was too young to protest, I cried and cried and prayed and prayed.”

For Absaruddin, one of six children, the ordeal started when he went with his two relatives and a friend from his village to the town of Teknaf, on the Bangladesh-Myanmar border. As they ate breakfast, they were asked by some strangers to go to a garden, where they were tied up with ropes, beaten and taken to the overcrowded migrant boat.

At first they were given two meals a day of rice and fresh water but then they were only given biscuits and forced to drink seawater. “I think about 100 people died of starvation and their bodies were thrown out to sea,” Absaruddin said.

He said that on Thursday, as they floated not far off the coast of Indonesia’s Aceh province, violence erupted and the Rohingya, armed with weapons including guns and sharp objects, turned on the Bangladeshis. “They beat us and then many of us jumped into the water for safety,” he said, adding that he floated by clinging onto a plastic water container until he was saved. His friend who was on the boat was also rescued but was now ill, he added.

However, Muhammad Tayoub Ali, a Rohingya migrant, claimed the Bangladeshis tried to take food from the Rohingya that was being saved for babies and children and then began attacking them. “The Bangladeshis threatened to kill us all, then we jumped in the sea. There were also some who were thrown into the sea,” said the 25-year-old, adding they were rescued five hours later.

Speaking from Bangladesh, Absaruddin’s brother Jalaluddin confirmed he and the other three had gone missing. While the Rohingya are fleeing persecution, the Bangladeshis are trying escape deep poverty.