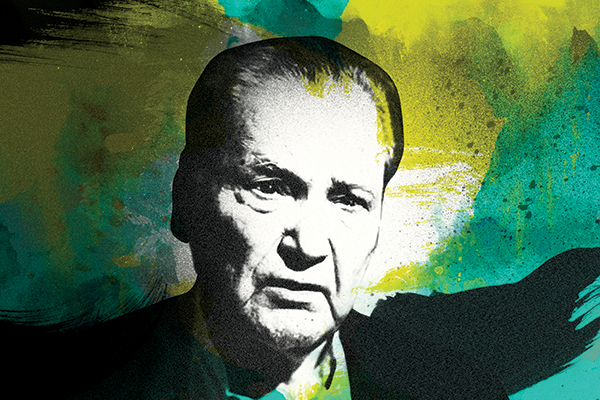 Dr. Javid Iqbal, a former justice of the Supreme Court of Pakistan, died in Lahore on Oct. 3 after living 90 years in the shadow of his great father, Allama Dr. Muhammad Iqbal, the philosopher-poet of Pakistan.

Did the son become stunted in the reflected glory of his father? Did he accept the dubious status of a successor to whom originality was forbidden lest he extend the limits of a great thinker that was his father? It is possible that people ignored his efforts at becoming his own self after docketing him under the larger shelf of his storied father. He adhered to his father’s legacy, but interpreted him often at odds with Pakistan’s official textbooks. Javid Iqbal was original and walked a little bit ahead of his father, not minding that the state had to thrust him into obscurity in order to save its ideology from being modified.

In his book Islam and Pakistan’s Ideology (2003), Iqbal accepts the fact that his father imagined an Islamic state but is at pains to clarify that he did not envision what Pakistan finally became. He wrote: “If Islam is the basis of Pakistan, then which interpretation of Islam was its inspiration? Why were most [clerics] opposed to its creation? Especially when the earlier Islamic movements had failed in India, why did the one opposed by the [clerics] succeed?” He also asks why the expression ‘Islamic state’ does not appear in the Quran or Hadith.

Iqbal said Pakistan was established on a reconstructive view of Islam and was thus opposed by the clerics. Whenever the Muslims of India were derailed from workaday pragmatism by the emotionalism of the clerics they suffered grievously. An Islamic state had never been formed before, and the one formed by Islam’s Prophet in Medina is not acceptable today because his “constitution,” Mithaq-e-Madina, conferring equality of citizenship on non-Muslims is not acceptable to the orthodoxy.

He had a tough childhood; the matrimonial life of the national poet was a bit of a shipwreck. He knew his father was great and guarded Allama Iqbal’s originality without scaling down his genuine admiration for him. His memoir Apna Gareban Chaak (2010) recalls Rousseau’s Confessions. He was unworshipful of his father without seeking to build himself up at his expense. His story begins with his acting the prodigal son, not heeding his father’s last advice against extravagance, and ends in Iqbal finally meeting his father’s expectations of him. He stood first in M.A. Philosophy in the Punjab before leaving for Cambridge. When he was sailing to London in 1949, he noted that, passing the Saudi peninsula, he was not overcome by any feeling of desolation at not being “called” to Hijaz as his father was during his voyage.

What he did during the voyage was flirt like crazy, as shared in Jahan-e-Javid, Vol. 2 (2010). His diary reveals that, his first day on the deck of Celicia, he attitudinized brazenly, pretending to write his first novel, I Am a Muslim, in his room after dancing all evening on the deck. The 25-year-old was soon noticed by a 40-year-old lady and a relationship developed. She was rich and beautiful and quickly graduated from “aunty” to an object of envy for other women. After all these little affairs on the ship, he was to meet his future wife, Nasira, in London.

But his playfulness soon resulted in his losing his first three terms at Cambridge without a clue about what he had come there for. Iqbal’s lack of knowledge of Arabic, Greek and Latin disqualified him for research into Imam Ghazali and Imam Abu Hanifa. He finally plumped for an investigation into the theory of the Islamic state and got his Ph.D. in it. As a result, he has written more clearly about the Islamic state and has done a better job of confronting the clerics than his father. Iqbal’s most important book is Zindarud (2004), a voluminous biography of his father that carefully records the facts without fluffing some of the warts that a conventional son would have discreetly left out. This book is the best explanation of why his father was a great man.

Iqbal once took on Pakistan’s most transformational military president, Gen. Zia-ul-Haq. It happened at a seminar in Karachi on Dec. 25, 1986, to commemorate the birth anniversary of Pakistan’s founder, Jinnah. Iqbal publicly told the general that his father was opposed to medieval punishments like the cutting of hands. He was referring to Allama Iqbal’s “sixth lecture,” which has become the second document of national embarrassment after Jinnah’s Aug. 11, 1947, speech. Zia responded to Iqbal: “If that is the case, then we have to set Allama Iqbal aside.”

In 2008, Iqbal wrote his interpretation of his father’s lectures in the face of a studied neglect of the poet’s take on the Islamic state. In Khutbaat-e-Iqbal: Tas-heel-o-Tafheem, Iqbal explains to his father’s conservative critics what the sixth lecture had really tried to communicate. The crux of the argument was whether Allama Iqbal was overstepping the boundaries of “reinterpretation” set by classical jurists of Islam. The controversial phrasing from the lecture was: “The Shariat values resulting from this application (e.g., rules relating to penalties for crimes) are in a sense specific to that people; and since their observance is not an end in itself they cannot be strictly enforced in the case of future generations.”

Iqbal defended his father against the fundamentalist upsurge peaking by the end of the 20th century. Ground reality gives the lie to those who want Islamist punishments retained under one pretext or the other. The Taliban promised such a system in Pakistan with the help of a vast madrassah network. Pakistan is still unable, officially, to cut the hands of its thieves although these punishments have been awarded by the lower courts. Iqbal spoke from his experience as a judge when he found fault with the concept of diyat or blood money that favors the rich and encourages planned homicide.

On March 7, 2011, Javid Iqbal was interviewed on TV on the nature of the Pakistani state. He said Pakistan, as envisaged by Jinnah, was to be a secular state: “Hard Islam was not the project of Jinnah; the Islam of Hudood and blasphemy laws was imposed by General Zia.”

This is the most reliable brief about the life of Javid Iqbal by Khaled Ahmed and I think every learned and a secular minded reader will enjoy the contradictions pointed out by the respected author through the political and scholarly interventions of Javid Iqbal when he tried to reference the teachings and writings of his father Alama Iqbal to the ductator Zia, who wanted to impose Shari’ah laws on Pakistan during the 1980s.

Javid Iqbal had an intellectual distance from his father on several political and cultural issues because he witness and observed very closely Pakistani elites and their double standards – but he refrained from challenging them due to the privileges he enjoyed as an elite himself. Both equally, Pakistani military establishment and the Civilians power Brokers respected Javid Iqbal because he belonged to the Grand Iqbal Family. But Javid Iqbal had a little respect for the Pakistan army generals like Zia and Musharaf and he fought against Bhutoos too.

A good article on life history of Javaid Iqbal . He was a self styled narration person and try to clarify misconceptions and misunderstanding of clerics who have selected version on own liking and left Iqbal,s remains thoughts with reading . Now are we are taught Iqbalyat of own liking .whereas as his thoughts have universal perception . Javaid Iqbal has truly painted picture of his father as Progressive scholar who wants positive change in life of common man through giving social and economic right not through implementation of severe punishments . He bravely talked against orthodoxy ,Talibisation and opposed Zia narrative of iIslam .

Someone sitting in supreme court can challenge everything the book of law holds. An intellectually strong person like him should have taken a step. If he couldn’t, then forget about a common man and his power.

No son of a great legend is like father.