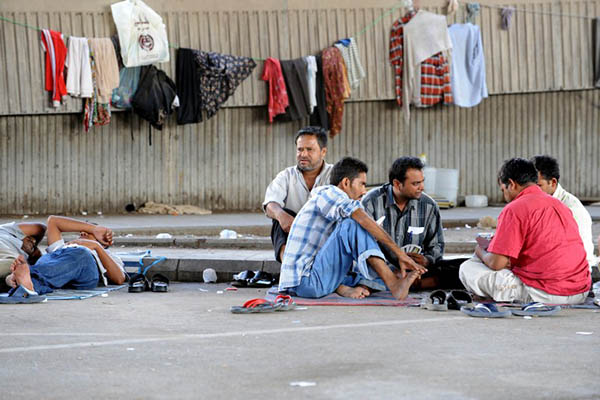 Thousands of jobless Indians, Filipinos and Pakistanis are stranded and destitute in Saudi Arabia after the plunge in oil prices sparked construction layoffs, activists and officials said Tuesday.

Islamabad said 8,520 of its nationals in Saudi Arabia had not been receiving their salaries for several months. A foreign ministry statement said “most of the workers want to leave these companies but only after settling their dues.”

The Pakistan embassy has set up special centers and a fund to provide aid, food, medicine and shelter. “The [Pakistani] embassy has further informed that Saudi King has issued a decree for urgent payment of dues to workers by the concerned,” the office of the prime minister said. “We stand by our hardworking workers who are away from their homeland to earn a living for their families. They are our strength and pride. We will help them out in all possible ways,” Prime Minister Nawaz Sharif said in a statement.

Some Filipinos are forced to beg or sift through garbage to survive after going unpaid for months, said Garry Martinez, chairman of the Migrante group, which works for the millions of Filipino overseas workers worldwide. “Some of them have nothing to eat and have to go through the garbage for food,” said Martinez.

India said Monday it was negotiating with Saudi authorities to repatriate thousands of its own nationals after they lost their jobs, leaving them with no money to return home. Indian Foreign Minister Sushma Swaraj told parliament in New Delhi she was sending a junior minister to Riyadh after reports that around 10,000 Indian workers had been left to starve.

Indians are among millions of poor Asians working in the Gulf states, where human rights groups say many suffer exploitation and abuses including non-payment of wages.

In Manila, Migrante coordinator Gilbert Saludo—who returned from Saudi Arabia last month after two years working there—said as many as 20,000 Filipinos could be affected. He said that while Manila had extended financial aid to them so far, it was not clear how long this could last.

The labor problem appeared likely to worsen, he added. “It will get much worse because so much of the income of Saudi Arabia comes from oil… so their budget for infrastructure and other projects will not be met and more people will be affected,” Saludo told AFP.

The Philippine Labor Department said Labor Secretary Silvestre Bello had visited Saudi Arabia last month to address the problem but would not elaborate.

The Indian consulate in Jeddah has been providing free food for its nationals since their plight came to light last week but repatriation has been complicated by restrictive labor regulations. Swaraj cited a Saudi requirement that workers provide a no-objection certificate from their employers before they can leave the country.

In Manila the Migrante officials also said Filipinos could not leave because they lacked proper permits or were still awaiting months of back pay.

Respected Newsweek in Pakistan secretary for foreign affairs exist who Sartaj Aziz but you write minister foreign who is ?