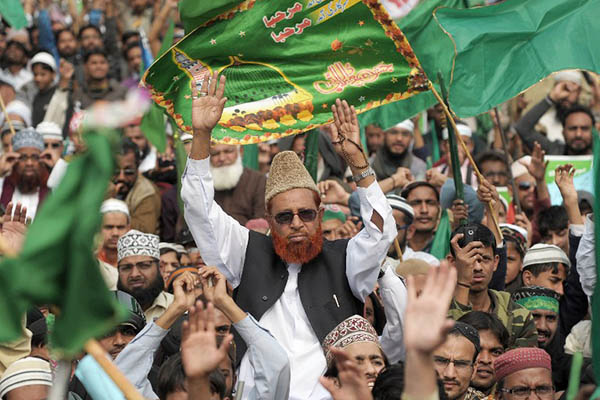 Thousands of people marched in Pakistan on Thursday against French satirical magazine Charlie Hebdo as anger remains high over the publication of cartoons of Islam’s Prophet.

The march through the streets of Karachi was the biggest in a series of demonstrations against the magazine, whose Paris offices were attacked on Jan. 7 by Islamist gunmen, killing 12 people. An intelligence official overseeing the rally told AFP that the protesters numbered in the “thousands,” still a relatively small turnout in a city of 18 million people.

Protesters carried green flags printed with the Prophet’s Mausoleum and chanted anti-Charlie Hebdo slogans as they marched. “Down with Charlie Hebdo, down with the blasphemers,” they shouted. Many carried placards demanding blasphemers be killed.

One of the protest leaders, Sarwat Ejaz Qadri, demanded that the Pakistan government cut diplomatic ties with France. “Their ambassador should be declared persona non grata and must be expelled from the country,” Qadri said.

In Quetta, some 400 activists of Markazi Jamiat-e-Ahl-e-Hadith, a Sunni Muslim organization, held a demonstration in front of the press club and burned a French flag. The demonstrators, many of them children, carried placards condemning the satirical magazine and shouted slogans including: “Let blasphemers be hanged, we will not tolerate anyone ridiculing our Prophet.”

In Lahore, around 2,000 people from different groups including labor unions and a body that represents government clerical staff, also held a demonstration condemning the publication of the cartoon. The protestors chanted slogans including “Down with France, France should tender an apology.”

Across the border in Afghanistan, around 50 people gathered outside the French Embassy in Kabul to protest against the magazine, chanting “France you are the devil.”

Charlie Hebdo last week published a “survivors” issue with an image of Islam’s Prophet weeping on the cover. The issue quickly sold out before more copies of an eventual print run of five million hit newsstands.

Under Pakistan’s strict blasphemy laws, insulting Islam’s Prophet can carry the death penalty, and the prime minister and Parliament last week strongly condemned the publication of the cartoons.

At least three people were injured on Friday when protesters and police clashed at an anti-Charlie Hebdo demonstration outside the French consulate in Karachi.