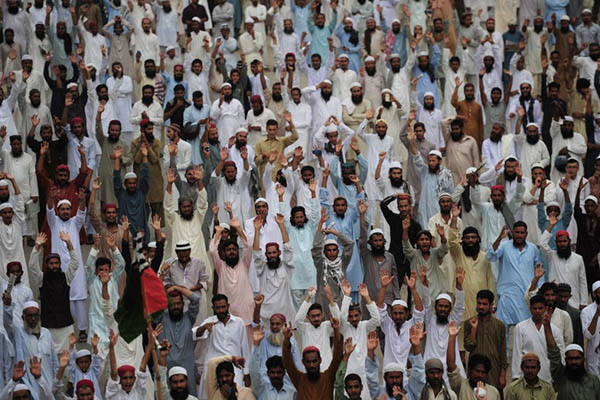 Militant group calls for local residents to take up arms and join struggle across Line of Control.

Thousands of protesters marched in Pakistan-administered Kashmir on Friday to denounce recent deadly clashes with Indian security forces, with some calling for war over the disputed frontier.

About 4,000 people gathered in Muzaffarabad, some carrying photos of slain rebel leader Burhan Wani, whose killing last week sparked unrest that killed 32 people—the deadliest clashes in Kashmir since 2010 when massive demonstrations were held against Indian rule.

“India understands the language of bullet and not voice of people. We have no other option, just to start an armed struggle,” Maulana Abdul Aziz Alvi told the crowd. “We call on the military and political leaderships that Kashmiri mujahideen should be allowed to go and fight against the Indian troops and for the freedom movement.”

Kashmir has been divided between rivals India and Pakistan since their independence from Britain in 1947, but both claim the picturesque Himalayan territory in its entirety. The two countries agreed a border ceasefire agreed in 2003 that has largely held, though there are fears the unrest could lead to a revival of cross-border militancy.

“We came here today to show solidarity with the oppressed Kashmiris in Indian-held Kashmir. We want to tell the world about the brutalities against the unarmed civilians in Kashmir,” said Muhammad Tahir, a 26-year-old student.

Indian police said most of those who died were protesters killed by gunshot wounds as troops fired live ammunition and tear gas to try to enforce a curfew imposed across the Kashmir Valley.