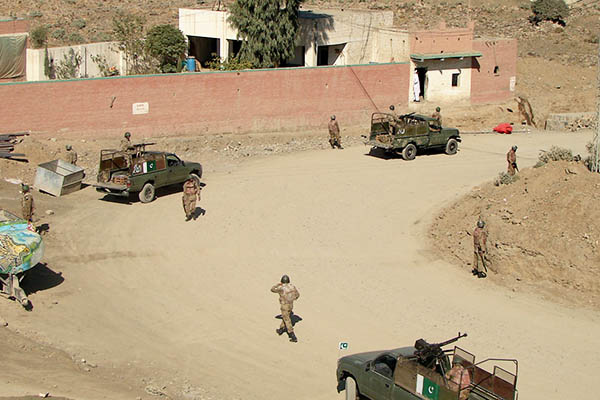 An improvised-explosive device detonated along the border between North and South Waziristan on Sunday, killing at least three security personnel, security officials said.

Military officials confirmed the incident, adding that the IED had targeted a military vehicle on patrol. “The IED was planted by terrorists on the roadside,” said a military official on condition of anonymity. “At least three security forces personnel, including an officer, were killed in the incident,” he said, adding, “Another three were injured and are currently in critical condition.”

While no group immediately claimed responsibility for the attack, militants in South and North Waziristan often target Pakistan’s armed forces. On April 16, the Pakistani Taliban refused to extend a ceasefire and warned that security forces could be targeted.

Separately, unidentified militants attacked a convoy of NATO containers in the Jamrud subdivision of Khyber Agency on Monday morning. “The gunmen opened fired on the NATO containers carrying fuel for the coalition forces in Afghanistan,” according to a local administrator. “Two people were injured in the incident,” he added.