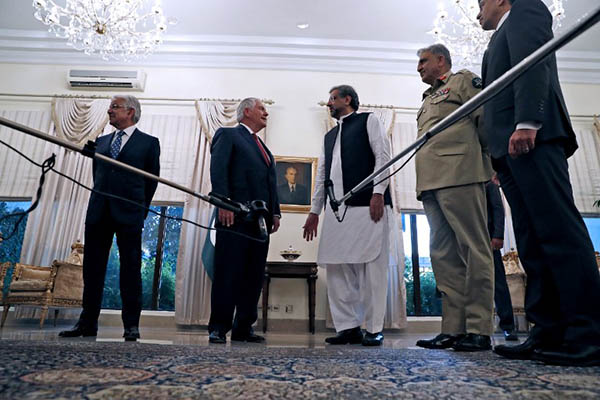 Reading between the lines of the U.S. Secretary of State’s short visit to Islamabad

According to consensus in Pakistani media, U.S. Secretary of State Rex Tillerson “got a frosty welcome” in Islamabad due to Washington’s claim it provides “safe havens” for the Taliban. One can’t help wondering how Prime Minister Shahid Khaqan Abbasi and Army Chief General Qamar Javed Bajwa would react to this verdict on Tillerson’s visit. Since President Trump expressed a negative view of Pakistan—and a positive one of India—in August, the common man in Pakistan was primed for a faceoff; and the bilateral “thaw” that occurred after the Canadian-American hostages’ rescue by Pakistan from the Haqqani Network didn’t count.

Talking to the Pakistani team headed by P.M. Abbasi, Tillerson couldn’t stray from Trump’s lead but did note the premier and Army chief sitting together in the talks and took care to give a longer squeeze to the former’s hand than the latter’s after the talks. He said what he had to say: get the “safe havens” out of the way before we get to normal dialogue. The answer was a rebuttal: Pakistan had no safe havens and if there were any they were destroyed during two military operations: Zarb-e-Azb and Raddul Fasad. Half of Afghanistan was occupied by the Afghan Taliban where Pakistani Taliban had its safe havens and was taking money from India to attack inside Pakistan. When asked what if America imposed sanctions, Foreign Minister Khwaja Muhammad Asif replied Pakistan didn’t want any money from America any more, forgetting that America was still Pakistan’s largest trading partner.

The Abbasi government was also communicating internally, that is, showing backbone to the public and disarming an Army deeply suspicious of its real intent vis-à-vis America and India. All the ministers except Finance Minister Ishaq Dar were there and smiling broadly, confirming the new stance that the cashiered prime minister and party boss Nawaz Sharif didn’t like but was to be persuaded to adopt: don’t buck the Army and focus on winning the 2018 elections to prevent Imran Khan from taking over the country. The U.S. may have gummed up the situation in Afghanistan but Pakistan’s own fallout from its Afghan policy—the radicalization of a perennially unstable state—remains unaddressed.