Timothee Chalamet Shoots for the Stars 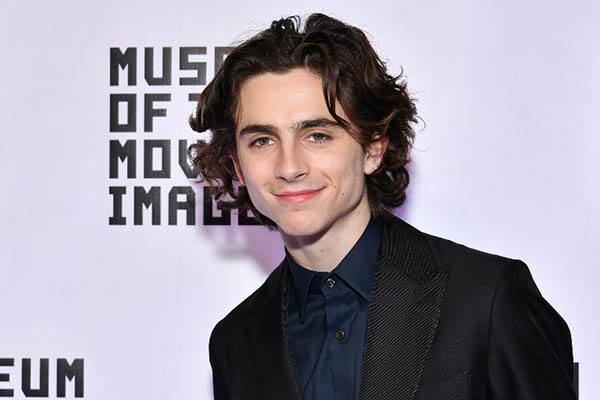 Breakout star of two of 2017’s hottest movies has already been showered with acclaim, awards nominations

Virtually unknown a year ago, Timothee Chalamet is the very definition of a breakout star, featuring in two of 2017’s hottest movies and vying Sunday for a Golden Globe.

The 22-year-old New Yorker has been showered with acclaim and awards nominations for his starring role in Luca Guadagnino’s paean to the universal heartbreak of first love, Call Me by Your Name.

Chalamet—who embodies the Socratic ideal of youthful, unsullied beauty with his brown curls, porcelain cheekbones and coquettish green eyes—has charmed critics with his performance as precocious, sensitive teenager Elio. The teen, a bored 17-year-old American who must spend summer in rural northern Italy, becomes transfixed by Oliver (Armie Hammer), the handsome graduate student who has come to work with Elio’s professor father.

In the latest of his numerous awards for the part, Chalamet won the rising star trophy alongside co-honoree Gal Gadot at the Palm Springs film festival in California on Tuesday.

“It’s truly an awesome feeling to get to be in the rising stars category tonight alongside Gal Gadot. Gal, your film has literally made 250 times more money than my movie has,” the self-effacing star said. He thanked Hammer for his “big brotherhood” before turning to his friend’s wife Elizabeth Chambers with a cheeky smile and thanking her for “letting me crawl all over your husband for two months.”

Chalamet told AFP when the film was released in late November that the role, for which he had to learn Italian, had “changed” him.

Guadagnino is full of praise for his “sublime” young star. “He is such a courageous and surprising actor… He is always in the moment,” the director told AFP.

“Could Timothee Chalamet pull off an upset at the Golden Globes by winning best film drama actor for Call Me by Your Name?” wondered awards prediction website Gold Derby. “Gary Oldman (Darkest Hour) has been the presumptive Oscar-season frontrunner since before his film was even released in November, but there are signs that he may be vulnerable.”

Sacha Stone, of the Awards Daily website, said Chalamet was in vogue not just because he’s in a beloved movie but also because people were seeing him for the first time as a “charismatic and good looking young star.”

Add to the mix his various skills—he was already fluent in French due to his family roots before taking on Italian, and plays piano and guitar in the movie—and you have an actor with “the right balance of good looks and talent that make him hard to ignore,” added Stone.

Like 23-year-old Baby Driver actor Ansel Elgort, another rising star vying for Globes glory, Chalamet studied at the prestigious LaGuardia high school for the performing arts in New York. It was there that he met his one-time girlfriend Lourdes Leon—Madonna’s daughter.

Chalamet comes from a family of artists, inheriting his performing chops from his mother, former Broadway dancer Nicole Flender, and his creative side from his grandfather, the screenwriter Harold Flender. His aunt is television producer and writer Amy Lippman and his older sister Pauline is a Paris-based actress.

With a head start in the business, Chalamet already has a decade of work on his resume, including a role as the son of Matthew McConaughey’s space pilot in Christopher Nolan’s Interstellar (2014). He has also been a murder victim in the flagship detective series Law and Order, and a college student in Homeland.

Had he missed out on Call Me by Your Name, 2017 would still have been a huge year, with roles in Scott Cooper’s brutal western Hostiles and Greta Gerwig’s awards season darling Lady Bird cementing his profile.

In Lady Bird, Chalamet steals the show as an edgy musician and all-around cad who starts up a relationship with Saoirse Ronan’s Catholic schoolgirl.

This year, he is due to star in Woody Allen’s Rainy Day in New York opposite Elle Fanning, Jude Law and pop star Selena Gomez, and he also takes on the role of a drug addict in the drama Beautiful Boy.