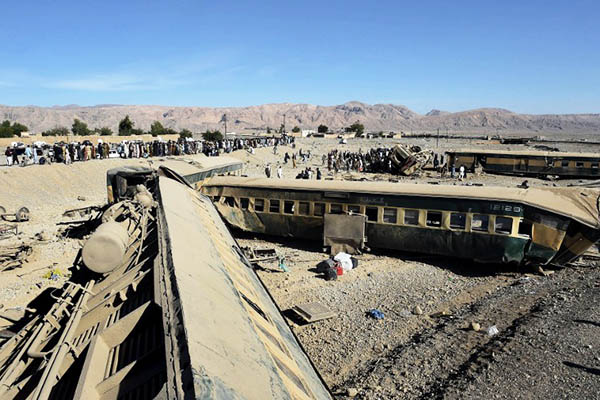 At least 16 people were killed and more than 100 hundred injured on Tuesday when a train derailed in Pakistan’s Balochistan province, administration and railway officials said.

The accident occurred near Quetta, the provincial capital, after the train’s brakes failed as it sped down the side of a mountain, officials told AFP. “Four carriages of a Rawalpindi-bound train which left Quetta railway station were derailed near Abegum area of Bolan district, some 75 kilometers from Quetta city,” said Akbar Hussain Durrani, Balochistan home secretary. “The incident happened because the brakes of the train failed,” he said, adding that at least 16 people had died.

The military said in a statement that 47 injured passengers were airlifted to hospital in two helicopters, with a spokesman saying earlier that at least 26 of those had been seriously injured. According to Durrani, five were in critical condition. Other wounded passengers were transferred by ambulance, the statement said.

Faiz Bugti, a senior railways department official, and head of local community police Tariq Zehri also confirmed the accident. The Army has joined a rescue and relief operation and was to use heavy machinery to free victims, while a quick response force from the paramilitary Frontier Corps was also deployed, authorities said.

Durrani meanwhile praised residents of a nearby village who helped with the rescue efforts. Railway officials said the train was carrying around 300 passengers.

Among the dead so far confirmed are 12 passengers, the train driver and his assistant, and two members of the railway police, Durrani said.

Train accidents are common in Pakistan, which inherited thousands of miles of track and trains from former colonial power, Britain. The railways have seen decades of decline due to corruption, mismanagement and lack of investment.

In July, at least 17 people were killed when a special military train fell into a canal after a bridge partially collapsed.