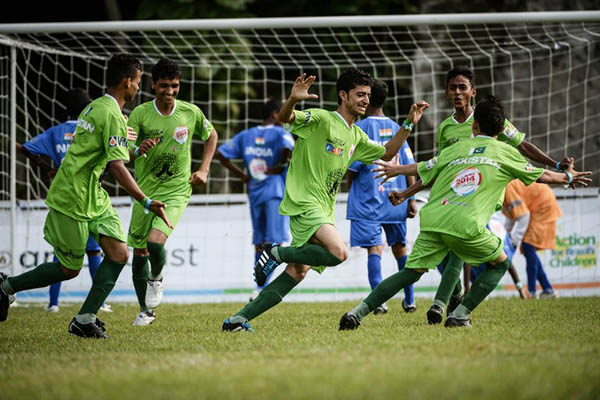 The bronze-medal winners of the Street Child World Cup in Brazil hope their performance will encourage search for ‘hidden talent.’

Pakistan’s street children footballers returned home Tuesday to cheers from thousands of fans after clinching the bronze medal in Brazil, with captain Sameer Ahmed hailing the “once in a lifetime” experience.

Competing for the first time in the Street Child World Cup, the Pakistanis hammered title-holders India 13-0 in their first match before beating Kenya and Mauritius and tying with the United States to top their group. They squeezed past the Philippines 3-2 in the quarter-finals before losing to Burundi 3-4 in the semi-finals, but beat the U.S. 3-2 on penalties in the third-place play-off to cap a remarkable tournament for the rookies.

Around 4,000 people gathered at Karachi airport to welcome the children back home in an overwhelming display normally reserved for the country’s cricketers, Pakistan’s main representatives in international sports.

“We were unknown kids before this World Cup, but after seeing such a big crowd I am very happy that people now know us,” said Ahmed. “We had never thought that we will go to Brazil, we just heard the name of Brazil which is famous for football. Our representation in the event and finishing third has proved that there is enough hidden talent of football in our streets and the only need is to unearth that talent,” he added.

For Pakistan’s leading goal-scorer Raziq Mushtaq, 15, the win over rivals India was particularly sweet. “India beat us in cricket World Twenty20 but we exacted the revenge in football and that win over India gave us the confidence to do well in the tournament,” said Mushtaq, who hit the back of the net eight times against India and scored 18 goals overall.

The children, many of whom are former drug addicts or members of gangs linked to Karachi’s ethnic and political violence, were rehabilitated by the non-profit Azad Foundation. Coach Abdul Rashid praised the team’s commitment, and said the third-place finish was a result of the hard training they had been putting in since October.

“They played with great passion,” said Rashid. “They proved they had talent and we groomed them for the World Cup.” He said the tournament also proved that Pakistan, currently ranked 158 in FIFA rankings, could do bigger things on the world stage. “It is now up to us to unearth the hidden talent which can go places and make Pakistan a bigger footballing nation,” he said.

FIFA initiated the tournament in 2010, with the first edition held in South Africa and the second in Rio de Janeiro ahead of the World Cup that begins in June.