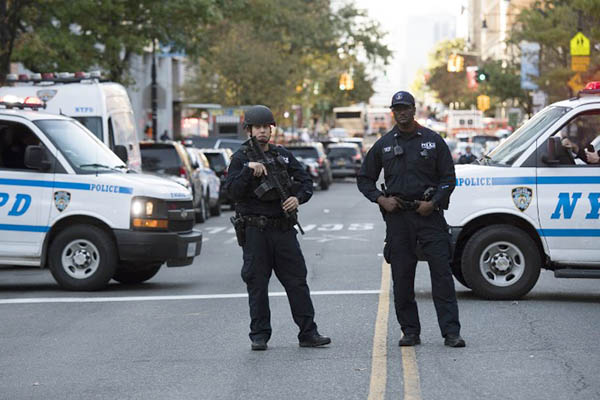 A pickup driver killed eight people in New York on Tuesday, mowing down cyclists and pedestrians before striking a school bus, in the city’s first deadly attack blamed on terror since September 11, 2001.

Eleven others were seriously hurt when the truck driver struck in broad daylight just blocks from the 9/11 Memorial, on the West Side of Lower Manhattan, close to schools as children and their parents geared up to celebrate Halloween. “This was an act of terror and a particularly cowardly act of terror aimed at innocent civilians, aimed at people going about their lives who had no idea what was about to hit them,” said Mayor Bill de Blasio.

Law enforcement sources identified the perpetrator as Sayfullo Saipov, 29. He was arrested in Missouri on a traffic fine last year. The Uzbek citizen living in Tampa, Florida had recently been staying in New Jersey, where the truck was rented, reports said.

President Donald Trump denounced him as “very sick” and a “deranged person.” Confronting what could be the most serious terror-related incident since taking power less than a year ago, the Republican commander-in-chief announced that he had ordered the Department of Homeland Security to step up his “extreme vetting program” on foreign travelers to the country.

The United States “must not” allow Islamic State jihadists to “return, or enter” the country after being defeated overseas, Trump said, albeit as New York officials declined to link the assailant to a specific group.

Police said he drove a rented Home Depot pickup down a bike and pedestrian lane, where tourists and New Yorkers were out enjoying brilliant fall sunshine, at 3:05 p.m., before colliding with a school bus, wounding two adults and two children.

The suspect then exited the vehicle brandishing weapons that were subsequently identified as a paintball gun and pellet gun, before being shot in the abdomen by a police officer and taken into custody, police said.

Television footage showed the mangled wreckage of the pickup truck, bicycles crushed to smithereens and bodies wrapped in sheets and lying on the ground.

Eight people were killed, six of them men who died on the spot, and two others pronounced dead in hospital. Eleven other people were taken to hospital with serious but not life-threatening injuries, officials said.

Five Argentines were among the dead, the Foreign Ministry said. Brussels said a Belgian woman was killed and three other Belgians were wounded.

European allies and Mexico’s president condemned the attack. “Together we will defeat the evil of terrorism,” said British Prime Minister Theresa May. French President Emmanuel Macron tweeted: “Our fight for freedom unites us more than ever.”

U.S. media said the suspect shouted “Allahu Akbar” and police chief James O’Neill confirmed that he made a statement when he exited the vehicle. “If you just look at the M.O. of the attack, that’s consistent with what’s been going on. So that along with the statement has enabled us to label this a terrorist event,” O’Neill said. He was later operated on and was expected to survive, U.S. networks reported.

The FBI and New York police urged members of the public to come forward with any information that could assist the investigation, which the mayor said preliminary information suggested was a lone wolf assault.

The attacker struck in TriBeCa, one of the most expensive neighborhoods in the city. In the aftermath of the attack, worried parents and children were seen being evacuated from a nearby public school. “There was a smell of gunshots,” said John Williams, 22, who arrived at the scene 30 seconds afterward en route to the park. “There was a man lying on the ground. It looked as if he’d been shot.”

“When the cops shot him, everybody started running away and it got a little bit crazy right there. So when I tried to look again, the guy was already down,” a witness who gave his name only as Frank told local television network NY1.

Heavily armed police fanned out across the city of 8.5 million, home to Wall Street, Broadway and one of the biggest tourist draws in the United States.

Security was stringent at airports, bridges, tunnels and mass transit systems, with bag searches at Manhattan’s Grand Central transit hub and police stationed along a subway platform in Brooklyn.

A planned Halloween parade went ahead as scheduled, albeit under tight security and a large police presence, as State Governor Andrew Cuomo ordered the new World Trade Center to be lit red, white and blue “in honor of freedom and democracy.”

Tuesday’s attack was the first deadly terror-related incident in the U.S. financial and entertainment capital since the Al Qaeda hijackings brought down the Twin Towers, killing more than 2,700 people on 9/11. It came 12 months after a pipe bomb exploded in September 2016 in Chelsea, lightly wounding 31 people. An American of Afghan descent, Ahmad Khan Rahimi, was convicted of terrorism on Oct. 16 in relation with that attack.

In May, a U.S. Navy veteran plowed a car into pedestrians in Times Square, killing an 18-year-old woman and injuring 22 other people in what de Blasio said was not terror-related. On May 1, 2010 Pakistani immigrant Faisal Shahzad planted a car bomb in Times Square that failed to explode. He was arrested after boarding a flight to the Middle East and sentenced to life behind bars.